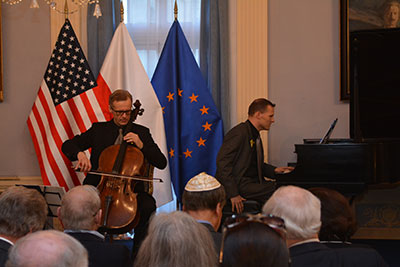 Morris Simon, The Simon Firm for the Embassy Series

We often turn to music to help express what words alone can not. Barber’s Adagio for Strings and "Nimrod" from Elgar’s Enigma Variations have been used countless times for memorial services. BSO Principal Cellist Dariusz Skoraczewski and pianist Michael Sheppard participated in just such a moving concert at the Embassy of the Republic of Poland on Tuesday, April 19. The event was in commemoration of the anniversary of the Warsaw Ghetto Uprising on April 19, 1943 and was produced in collaboration with the Embassy Series. Dariusz is a native of Poland and began his musical education at the age of six, spending his school years in Warsaw.

In 1943, on the first night of Passover, thousands of Jews rose up against German troops. The soldiers entered the ghetto to deport the remaining Jews to the exterminations camp at Treblinka. The battle lasted a month, and some 13,000 Jews were killed in the uprising and almost all of the remaining 50,000 were shipped out to the concentration camps.

The event at the Embassy of Poland began with comments from the Polish Ambassador. Then Dr. Stephen Kent and Bolek and Zosia Brodecki, survivors of the Holocaust, lit a menorah, and the Jewish memorial prayer, Kaddish, was recited. The musical program followed with Dariusz and Michael performing Max Bruch’s Kol Nidrei and Fryderyk Chopin’s Sonata for Cello and Piano in G minor.

After the stirring music, authors Witold Beres and Krzysztof Burnetko spoke about their book, Marek Edelman: Being on the Right Side. Edelman was a hero of the Warsaw Ghetto Uprising and remained in Poland after the war. He was a prominent physician and joined the anti-communist opposition in 1981. The book has been a best seller in Europe and is now available in an English translation.