No Week is Ever the Same 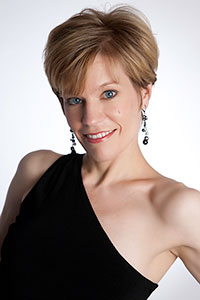 No Week is Ever the Same

“The beauty of my work is that no week is ever the same. If the orchestra repertoire in a given week doesn’t call for a keyboard instrument, I’m off playing solo or chamber music,” explained pianist Lura Johnson. And that is exactly what will happen this September. The BSO at Strathmore season opens on Thursday, September 18 with the Beethoven Violin Concerto and Mahler Symphony No. 4. Neither work calls for a keyboard instrument.  So instead of finding her onstage with the BSO, you’ll find Lura Johnson in DC , playing a concert with members of the VERGE Ensemble in the McEvoy Auditorium at the Smithsonian American Art Museum. The concert begins at 3 pm on Sunday, September 14. (There is limited space; admission is free, but tickets are required. You may line up for free tickets beginning at 2:30 p.m. in the museum’s G Street Lobby.)

“Chamber music is my first love—I’m a collaborative person at heart,” said Johnson. “Although the orchestra is certainly collaborative, it is more about one person (the conductor) articulating the artistic vision and the musicians bringing that vision to life. (Imagine if every violinist or bassist had the option to raise their hand during rehearsal to suggest a different tempo!) But in chamber music, all musicians take a lead role in shaping the interpretation of the work. Playing chamber music with musicians who listen, respond, and take risks in the moment is electrifying, for players and audience alike.”

The concert features the three pianists from the Verge ensemble. “VERGE is the oldest running new music organization in DC,” said Johnson. “A group of professional performers and composers founded what was then called Contemporary Music Forum in 1973 to encourage the composition and performance of the music of our time. The group was renamed ten years ago.”

This is a rare opportunity to hear The Rite of Spring in the piano four hands version. (Though, coincidentally, Music Director Marin Alsop and the BSO are playing the orchestral version of this masterpiece twice at Strathmore this season—Friday, January 9 at 8:15 pm and Sunday, January 11, 2015 at 3 pm.)
In 1910, Stravinsky had a dream that changed music history: “I saw in imagination a solemn pagan rite: wise elders, seated in a circle, watching a young girl dancing herself to death. They were sacrificing her to propitiate the god of spring.” This dream became the basis for The Rite of Spring. Stravinsky always composed his orchestral works at the piano. Due to the complexity, he wrote The Rite of Spring in piano four hands format. He published this version in 1913, the same year the orchestral version was premiered. While the piano version doesn’t have the colors of a huge orchestra, it does make Stravinsky’s complex rhythms and harmonies more transparent, an opportunity that music  lovers will savor.

Lura is playing The Rite of Spring with Audrey Andrist. “One of the challenges of playing music for four hands music is that someone is right in your space, with lots of overlap between the Secondo (lower part) player’s right hand and the Primo (top part) player’s left hand,” said Johnson. “It requires lots of choreography and hand crossing. And, you have to make sure you trim your fingernails! This work is one I’ve always wanted to play – it became the centerpiece for this program.”

The Sunday BSO at Strathmore program also includes Samuel Barber’s Medea’s Meditation and Dance of Vengeance. Lura Johnson has a special connection to this piece. “The Barber is one of the first works I played under Marin Alsop, during a BSO concert in 2008,” said Johnson. “One memorable section features a thrillingly malicious ostinato, or repeated rhythmic motive, which requires the pianist to coordinate with sections of the orchestra that are clear on the other side of the stage.  Exceptional listening and following skills are needed in order for this to be effective.”

What other piano highlights are in store for Lura and the BSO this season? More Russian music!  Lura says she is especially looking forward to Shostakovich Symphony No. 5, Mussorgsky’s Pictures at an Exhibition, and Stravinsky’s Firebird Suite. She is also often featured at the SuperPops concerts. “I love Jack Everly’s programs.  Jack has encyclopedic knowledge of Broadway repertoire, so I always learn things from his remarks during concerts.  It’s always fun to step into the glamorous world of pop and Broadway music a few times every season.”

It sounds like the 10th anniversary season for the BSO at Strathmore will be a busy and rewarding one for Lura. You can get a copy of her new solo CD, Turning, and keep track of her varied concert engagements at www.lurajohnson.com.