Looking to speak with a world-class oboe player? You may be surprised to learn that your best bet this month in Montgomery County might well be at the Gaithersburg Book Festival on May 17, 2014 at 10 a.m.

Washington Post columnist John Kelly wrote an April 16th article reviewing Michael J. Lisicky’s newest book “Woodward & Lothrop: A Store Worthy of the Nation’s Capital.” What he failed to mention is that Michael’s “other gig” is playing oboe with the Baltimore Symphony Orchestra. (The BSO Stories on our web site have chronicled Michael’s success as a writer.) This particular Post article has led to several appearances for Michael throughout Montgomery County and Washington, DC. 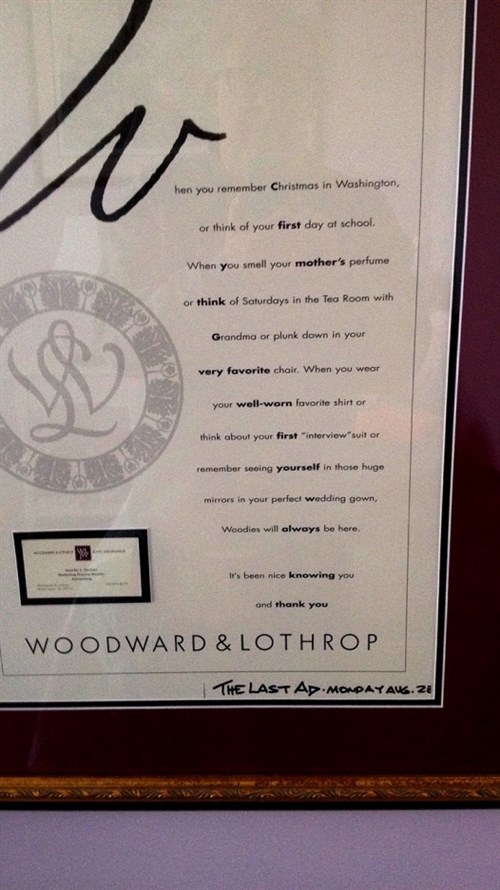 On Friday, April 18, Michael spoke to the Association of the Oldest Inhabitants of DC, where he talked about the sense of identity that Woodward & Lothrop provided for DC and its residents. Michael read the text of this ad the store wrote upon its closing in 1995. The ad was never printed and there are only two copies left (reprinted on the right).

“I’m always looking for personal connections in my books about department stores,” said Michael. After that talk, his book became the number-one selling business book in the country! Since 2010, he has given over 75 lectures, with many in public libraries in Washington, Boston and New York, and has sold over 20,000 books.

But, speaking about department stores and playing on the stage at Strathmore with the BSO aren’t the only ways Michael works in Montgomery County. He has been involved with BSO music education programs here since 2007. For the last two years, he has been part of a trio of BSO musicians that have been one of the more active participants in Orchlab, a BSO program for students in Montgomery County Public Schools. These sessions take place in the classroom and Michael loves the close-up interaction with the kids that this affords. “We get to know the kids’ strengths, weaknesses and their personalities,” Michael said. “Our programs are in small settings and we take on a mentoring role.”

"We are trying to teach kids to read music, because this is falling out of the curriculum. In addition to performing with them, we are having conversations about history and music theory,” he added. “This is why we visit each school five times,” Michael explained. “Montgomery County has some really committed teachers. We are working with programs that teach kids to play recorders, and we bring two oboists and a bassoonist to fourth and fifth graders. We work together on a variety of music—Mongolian Night Song, a composition called Farfalle (butterfly in Italian) and a work called Irish Fantasy (written by BSO bassist Jonathan Jensen).” It all culminates in a side-by-side public school performance with the students and the BSO trio.

Michael has also worked with elementary students to create their own compositions, and to learn to speak about their work at public concerts. “This is as much about psychology and sociology, as it is about music education,” said Michael. “We are developing a significant relationship with these kids.”