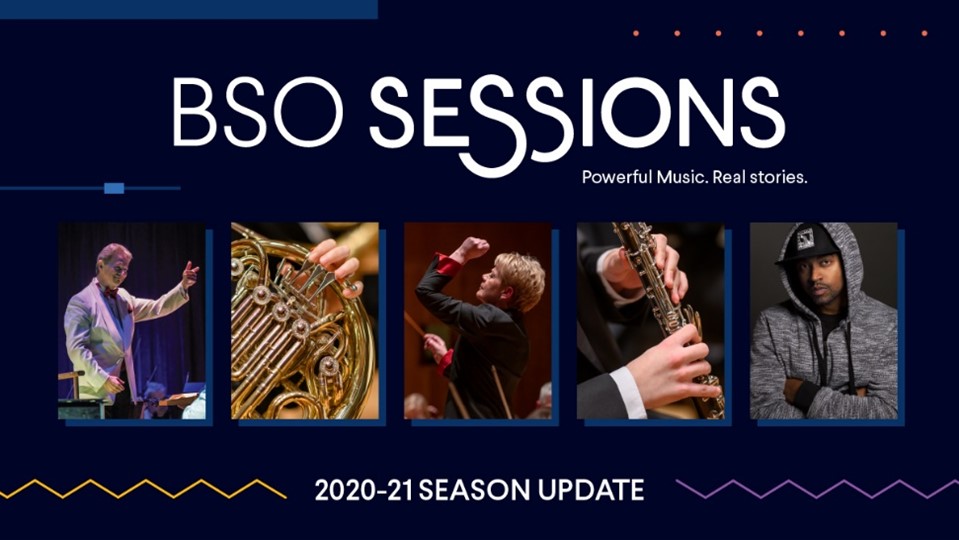 October 27, 2020 – The Baltimore Symphony Orchestra (BSO) today announces the extension of BSO Sessions and a commitment to presenting 27 new weekly installments with episodes featuring powerful music and real stories throughout the 2020-21 season.

The series will continue to bring the stories of BSO musicians, conductors, and collaborators to life through a documentary-style narrative paired with robust and inclusive programming. In addition to the first two episodes currently available and Episode 3 (Hidden Treasures) premiering tomorrow, upcoming BSO Sessions episodes celebrate a responsible return of winds and brass to the stage, as well as the series debut of Music Director Marin Alsop and Principal Pops Conductor Jack Everly. Assistant Conductor Jonathan Rush interviews the film composer Michael Abels, best known for his work in Jordan Peele’s Get Out and Us, and Artistic Partner Wordsmith joins in a special holiday episode with a new rendition of “’Twas the Night Before Christmas,” part of a broad array of inspiring programs.

Vice President & Chief Operating Officer Tonya Robles shared, “We’ve received great feedback to the first episodes of BSO Sessions. With so many digital options available, I’m proud that we found a unique, innovative way to tell the BSO’s story.” In looking ahead to forthcoming releases, Robles added, “We are excited to feature Music Director Marin Alsop and her trailblazing legacy, share the beloved voice of Principal Pops Conductor Jack Everly, and continue to get to know our musicians, conductors, and partners as the series progresses.”

In extending BSO Sessions, the BSO also announced the official cancellation of all previously advertised subscription concerts and special events at The Joseph Meyerhoff Symphony Hall and The Music Center at Strathmore through June 19, 2021. While these long-view subscription cancellations are not only necessary – informed by artist, orchestration, and audience concerns – they also provide the organization the opportunity to pursue new alternatives and programs with focused attention, innovation, and care. Plans include an exciting 2021 line up of BSO Sessions; the November launch of digital Midweek Concerts BGE Broadcasts, complete with curriculum-connected activities made available free for all schools, students, and families; the consideration of socially distanced indoor and outdoor open rehearsals and performances; and a multi-week celebration of Music Director Marin Alsop in June 2021 as she concludes her historic 14-year tenure with the BSO. The culminating event, a Gala Celebration featuring acclaimed vocalist Renée Fleming, remains set for Sunday, June 20, 2021. More details including virtual and/or in-person plans, tickets, and sponsorship packages will be confirmed at a later date.

“All of us look forward with great anticipation to the moment when we can welcome audience members back for live performances,” said President and CEO Peter Kjome. “The BSO remains committed to coming together in our concert halls and/or outdoors as soon as it is prudent to do so,” he added. “With the safety of our patrons, musicians, and staff, and other stakeholders in mind, we cannot ignore the influence of the pandemic on the balance of 2020-21 subscription programming. BSO Sessions, educational offerings, and other programs enable us to continue bringing great music to our community at a time when it is needed more than ever.”

New episodes of BSO Sessions are released weekly on Wednesdays. Episodes 4 through 9 are now available for pre-order at $10 per episode (pay-per-view). Monthly all-access plans are also available for $20 per month, including immediate access to all archived episodes to enjoy on-demand, as well as all new episodes as soon as they are released. For more information and to register for BSO Sessions, please visit BSOmusic.org/OffStage.

About the Baltimore Symphony Orchestra

For over a century, the Baltimore Symphony Orchestra (BSO) has been recognized as one of America’s leading orchestras and one of Maryland’s most significant cultural institutions. Under the direction of Music Director Marin Alsop, the orchestra is internationally renowned and locally admired for its innovation, performances, recordings and educational outreach initiatives including OrchKids.