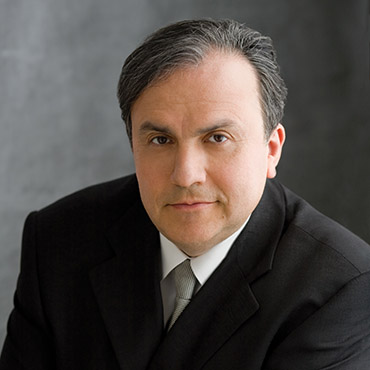 Yefim Bronfman is widely regarded as one of the most talented virtuoso pianists performing today. His commanding technique and exceptional lyrical gifts have won him consistent critical acclaim and enthusiastic audiences worldwide, whether for his solo recitals, his prestigious orchestral engagements or his rapidly growing catalogue of recordings.

The 2013-2014 season has sent Mr. Bronfman to Amsterdam, Helsinki, Lucerne, Berlin and Australia, and he is the New York Philharmonic's featured artist-in-residence. The remainder of the season includes a short duo tour with Pinchas Zukerman, returns to leading U.S. and European orchestras, a Far East visit with the New York Philharmonic, and a complete cycle of all the Beethoven concerti to bring the season to a close in June.

Mr. Bronfman was awarded the prestigious Avery Fisher Prize in 1991 and the Jean Gimbel Lane Prize in piano performance from Northwestern University in 2010. He was nominated for a GRAMMY® Award in 2009 for his Deutsche Grammophon recording of Esa-Pekka Salonen’s piano concerto, with whom he won a GRAMMY® Award in 1997 for his recording of the three Bartók Piano Concerti with the Los Angeles Philharmonic. This year, he has been nominated for a GRAMMY® with the New York Philharmonic for their recording of Magnus Lindberg's second piano concerto written for him on commission from that orchestra in 2012.

Born in Tashkent in the Soviet Union on April 10, 1958, Yefim Bronfman immigrated to Israel with his family in 1973. He studied with pianist Arie Vardi, head of the Rubin Academy of Music at Tel Aviv University. In the U.S., he studied at The Juilliard School, Marlboro and the Curtis Institute, and with Rudolf Firkusny, Leon Fleisher and Rudolf Serkin.