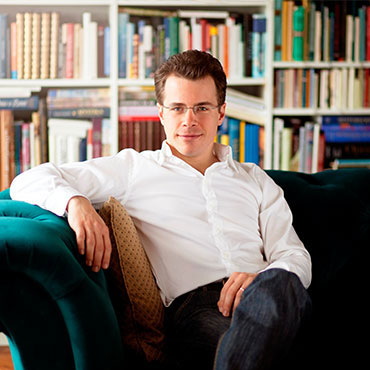 Born in the Czech Republic and described by Gramophone as "on the verge of greatness," Jakub Hrůša has served as Music Director and Chief Conductor of PKF – Prague Philharmonia since 2009. He is also Principal Guest Conductor of Tokyo Metropolitan Symphony Orchestra (TMSO), with whom he recently extended his commitment through the 17/18 season.

He is a regular guest with many of the world’s leading orchestras, including the Philharmonia Orchestra, Czech Philharmonic, Leipzig Gewandhaus Orchestra, Stuttgart Radio Symphony (SWR), WDR Cologne, Orchestre Philharmonique de Radio France, The Cleveland Orchestra and the Sydney and Melbourne Symphonies.

In the field of opera, he has been a regular guest with the Glyndebourne Festival and Tour since his début in 2008, conducting Carmen, The Turn of the Screw, Don Giovanni, La bohème and Rusalka and serving as Music Director of Glyndebourne On Tour (2010–12). Elsewhere he has led productions for Royal Danish Opera (Boris Godunov) and Prague National Theatre (The Cunning Little Vixen; Rusalka).

As a recording artist, he has released six discs for Supraphon including a critically acclaimed live recording of Smetana’s Má vlast from the Prague Spring Festival. Other recordings include the Tchaikovsky and Bruch violin concertos with Nicola Benedetti and the Czech Philharmonic (Universal), and live recordings of Berlioz’s Symphonie fantastique and Strauss’s Eine Alpensinfonie with TMSO (Octavia Records).

Originally from Brno, Jakub Hrůša studied conducting at the Academy of Performing Arts in Prague, where he now lives with his wife and daughter. He is currently President of the International Martinů Circle.