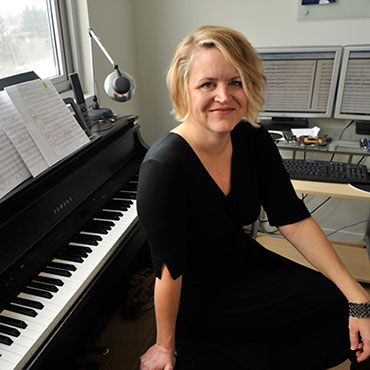 Composer Kristin Kuster “writes commandingly for the orchestra,” and her music “has an invitingly tart edge” (The New York Times). Her colorfully enthralling, lush and visceral compositions take inspiration from architectural space, the weather and mythology. Her orchestral music “unquestionably demonstrates her expertise in crafting unique timbres” (Steve Smith, Night After Night).

Most recently, Ms. Kuster received an OPERA American Grant for female composers, made possible through The Virginia B. Toulmin Foundation. The grant will support the recording of Kuster’s work Old Presque Isle, a 75-minute opera drawn from the haunting of northern Michigan’s Old Presque Isle Lighthouse. The opera is written for singer, six trumpets, two percussionists and men’s chorus, and features a libretto by poet Megan Levad, assistant director of the Helen Zell Writers’ Program at the University of Michigan.

Ms. Kuster was recently awarded one of the highest honors the University of Michigan bestows upon junior faculty — a 2015 Henry Russel Award. The award recognizes faculty early in their academic careers who already have demonstrated an extraordinary record of accomplishment in scholarly research and/or creativity, as well as an excellent record of contribution as a teacher. Given yearly, university-wide junior faculty are eligible for the Henry Russel Award, and Ms. Kuster is among only four music faculty to receive the award since its inception in 1926.

Ms. Kuster’s music has received support from such organizations as the American Academy of Arts and Letters (2004 Charles Ives Fellowship), the Sons of Norway, American Composers Orchestra, League of American Orchestras, Meet The Composer, the Jerome Foundation through the American Composers Forum, the Argosy Foundation, the Jack L. Adams Foundation, the Composers Conference at Wellesley College and the Larson Family Foundation. She has received commissions from ensembles such as the Colorado Music Festival Orchestra, the 6ixWire Project, the Lisbon Summer Fest Chamber Choir, the Atlantic Chamber Ensemble, the Michigan Philharmonic, Sequitur, the Left Coast Chamber Ensemble, the PRISM Saxophone Quartet, Cantori New York, the New York Central City Chorus, the Heartland Opera Troupe and the Summerfest Chamber Series.

Born in 1973, Ms. Kuster grew up in Boulder, Colorado. She is an Associate Professor of Composition at the University of Michigan and lives in Ann Arbor.