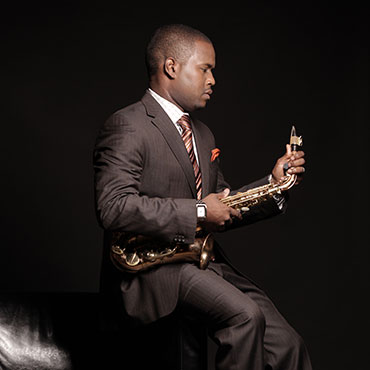 Forging a deeply personal sound from a broad swath of the jazz landscape, saxophonist, composer and arranger Tim Green has emerged as a powerful new voice, melding deftly swinging hard bop, fluid modernity and soulful gospel. Called "a player to watch," by JazzTimes, Green seized the attention of the jazz community with his second-place finish in the 2008 Thelonious Monk International Jazz Saxophone Competition. He delivered on that promise with the release of his 2012 album Songs From This Season, on his own True Melody Music label.

A Baltimore native, Green grew up in a musical family. While attending high school at the Baltimore School of the Arts, he was selected from amongst more than 500 hopefuls to join the 25-member Grammy High School All-Star Band. He studied at the Manhattan School of Music and the University of Southern California's Thelonious Monk Institute of Jazz, where he came under the guiding lights of legends like Herbie Hancock, Wayne Shorter and Terence Blanchard. He also forged his sound on the bandstand alongside a wide range of artists, including Christian Mcbride, Jon Faddis, Hubert Laws, Kenny Burrell, Patrice Rushen, Queen Latifah, Joe Chambers, Sean Jones, Carl Allen, Rodeny Whitaker, Eric Reed and Mulgrew Miller.

In 2003, Green was invited to attend the Jazz Aspen Snowmass summer program under such luminaries as Lewis Nash, Russell Malone, Benny Green, Wallace Roney and Christian McBride. He's since returned to Baltimore, where he's an active member of that city's thriving jazz scene as well as teaching at Morgan State University and his alma mater, the Baltimore School for the Arts. He's also an in-demand gospel musician and has played or recorded with the likes of Kirk Franklin, Donnie McClurkin, Yolanda Adams, Israel Houghton and Mary Mary.

"Tim Green is a dynamic musician," says Christian McBride. "If you make a checklist of everything you􀁠d want in a musician, Tim has it all."