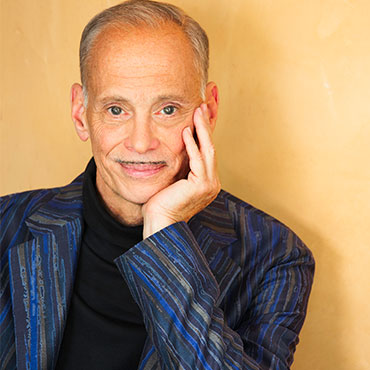 Born in Baltimore, MD in 1946, JohnWaters was drawn to movies at an early age, particularly exploitation movies with lurid ad campaigns. He subscribed to Variety at the age of twelve, absorbing the magazine's factual information and its lexicon of insider lingo.  This early education would prove useful as the future director began his career giving puppet shows for children's birthday parties.  As a teen-ager, Waters began making 8-mm underground movies influenced by the likes of Jean-Luc Godard, Walt Disney, Andy Warhol, Russ Meyer, Ingmar Bergman, and Herschell Gordon Lewis.

Waters made his first film, an 8-mm short, Hag in a Black Leather Jacket in 1964, starring Mary Vivian Pearce.  Waters followed with Roman Candles in 1966, the first of his films to star Divine and Mink Stole.  In 1967, he made his first 16-mm film with Eat Your Makeup, the story of a deranged governess and her lover who kidnap fashion models and force them to model themselves to death.  Mondo Trasho, Waters' first feature length film, was completed in 1969 despite the fact that the production ground to a halt when the director and two actors were arrested for "participating in a misdemeanor, to wit:  indecent exposure."

In 1970, Waters completed what he described as his first "celluloid atrocity," Multiple Maniacs.  The film told the story of Lady Divine and her lover, Mr. David, proprietors of a freak show who lure unsuspecting suburbanites into their tents to witness "The Cavalcade of Perversions."  In 1972 Waters created what would become the most "notorious" film in the American independent cinema of the 1970's, Pink Flamingos.  Centered on the great battle to secure the title "Filthiest People Alive," Pink Flamingos pitted Divine's "Babs Johnson" against Mink Stole and David Lochary's truly evil "Connie and Raymond Marble," while turning Waters into a cult celebrity.  Pink Flamingos went on to become a smash success at midnight screenings in the U.S. and all over the world.

Waters followed the success of Pink Flamingos with three more pictures, spanning the remainder of the decade.  In 1974 he created Female Trouble, the story of Dawn Davenport (Divine), a criminal who wanted to be famous so badly she committed murder.  1977 marked the premier of Desperate Living, a monstrous fairytale comedy starring the notorious Mafia moll turned stripper Liz Renay.  In 1981 Waters completed Polyester, a wide-screen comic melodrama starring Divine and Tab Hunter.  Filmed in glorious "Odorama," ticket buyers were given scratch 'n' sniff cards that allowed the audience to smell along with the characters in their fragrant search for romantic happiness.

In Hairspray (1988), Waters created "an almost big-budget comedy extravaganza about star-struck teen-age celebrities in 1962, their stage mothers and their quest for mental health."  The film was a box office and critical success and starred the then unknown RickiLake, Deborah Harry, the late Sonny Bono, Jerry Stiller, Pia Zadora and Ric Ocasek.

Pink Flamingos, the ultimate trash masterpiece, was again in theatres for a 25th Anniversary re-release in 1997, complete with newfound footage.  Commenting on the long-lasting popularity of the film, director Waters proudly boasts, "it's hard to offend three generations, but it looks like I've succeeded."

Pecker, a feel-good movie about lesbian strippers, pubic-hair harassment and amateur photography, was released in 1998.  It starred Edward Furlong and Christina Ricci.  The Japan Times called it "a Disney film for perverts."

Cecil B. DeMented, a comedy action-thriller about a young lunatic film director (Stephen Dorff) and his gang of film cultists who kidnap a real-life Hollywood movie goddess (Melanie Griffith) and force her to act in their own Super 8 underground movie, was released in 2000.  Kevin Thomas of The LA Times, called Cecil B. DeMented “a fast, furious and funny fusillade of a movie.”

In addition to writing and directing feature films, Waters is the author of seven books: Shock Value, Crackpot, Pink Flamingos and Other Filth, Hairspray, Female Trouble and Multiple Maniacs, and Art: A Sex Book (co-written with art critic Bruce Hainley).  His book, Role Models, was published by Farrar, Straus and Giroux in May, 2010 and earned spots on the best seller lists for the New York Times, Los Angeles Times and the San Francisco Chronicle.  Carsick, John Waters’ book chronicling his adventure hitchhiking from Baltimore to San Francisco in the Spring of 2012, was published by Farrar, Straus and Giroux in June, 2014 and debuted on the NY Times Bestseller list at #12 and on the Los Angeles Times Bestseller list in the #7 position.   The Grammy nominated audiobook version of CARSICK, as read by John Waters, was a featured pick by AudioFile Magazine, Publisher’s Weekly and the L.A. Times Sumer Reading list, among others.

Concurrent to his careers as a filmmaker and author, John Waters is also a photographer whose work, first represented by American Fine Arts and presently, the Marianne Boesky Galley in New York and Sprüth Magers in Berlin and London, has been shown in galleries all over the world since 1992.   Three art catalogs have been published on John Waters’ photographs and sculpture beginning with Director’s Cut in 1997 (Scalo Books).  John Waters: Change of Life followed in 2004 (Harry N. Abrams) to accompany a Waters retrospective exhibition at The New Museum of Contemporary Art in New York.  The exhibition traveled to the Fotomuseum Winterthur in Switzerland, the Orange County Museum of Art and The Andy Warhol Museum.  And finally, in 2006, the catalog, Unwatchable was published in conjunction with an exhibition of the same name that opened simultaneously at The Marianne Boesky Gallery in New York and de Pury & Luxembourg Gallery in Zurich.  In January, 2015, Waters’ exhibition, “Beverly Hills John” opened at the Marianne Boesky Gallery in New York and the exhibition will open in June, 2015 at Sprueth Magers Gallery in London.  Waters was invited to guest curate an exhibition at The Walker Art Center in Minneapolis in 2011-2012 as part of their Event Horizon ongoing project and his “Absentee Landlord” exhibition was held over by popular demand.

John Waters’ one man spoken-word lecture entitled “This Filthy World” is performed at colleges, museums, film-festivals and comedy clubs around the world.  He has played to sold out audiences at the Traverse City Comedy Arts Festival, the Coachella Valley Music and Arts Festival, Bonnaroo, the Sydney Opera House, Volksbühne Berlin, and Southbank Centre in London.  In 2004, the music compilation CD “A John Waters Christmas” was released by New Line Records and was followed up in 2007 by “A Date With John Waters”.

As an actor, Waters has appeared in many motion pictures including Jonathan Demme’s “Something Wild”, Woody Allen’s “Sweet and Lowdown,” Herschell Gordon Lewis’ “Blood Feast 2: All You Can Eat,” and Don Mancini’s “Seed of Chucky.”  In February, 2006, Waters hosted a 13-episode television series on the here! TV Network called “John Waters Presents Movies That Will Corrupt You.”  He also appeared in an episode of NBC’s hit show, “My Name Is Earl,” and played “The Groom Reaper” in the CourtTV series “Til Death Do Us Part.”  Recently, the entertainment industry has discovered the talents of John Waters as a voiceover artist and he has been featured on The Simpsons, Disney Channel’s Fish Hooks, Mickey Mouse shorts for Disney Television Animation and for various projects on the Discovery Network, Animal Planet and Turner Classic Movies.

Waters is a member of The Academy of Motion Picture Arts and Sciences and is on the Wexner Center International Arts Advisory Council.  Additionally, he is a past member of the boards of The Andy Warhol Foundation and Printed Matter and was selected as a juror for the 2011 Venice Biennale.  He is also a member of the Board of Directors for the Maryland Film Festival and has been a key participant in the Provincetown International Film Festival since it began in 1999, the same year Waters was honored as the first recipient of PIFF’s “Filmmaker on the Edge” award.  In September, 2014, Film Society of Lincoln Center honored John Waters’ fifty years in filmmaking with a 10-day celebration entitled “Fifty Years of John Waters: How Much Can You Take?” featuring a complete retrospective of his film work.