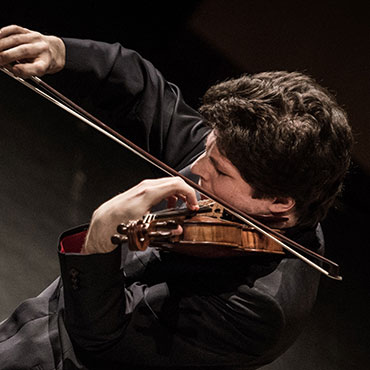 Continuing to astonish audiences with his phenomenal technique, poetic sensitivity and gorgeous tone, Augustin Hadelich has established himself as one of the great violinists of his generation. His remarkable consistency throughout the repertoire, from Paganini to Adès, is seldom encountered in a single artist.

Highlights of the 2015-2016 season include debuts with the Chicago Symphony, Pittsburgh Symphony, the Orpheus Chamber Orchestra in Carnegie Hall, and the Finnish Radio Orchestra, as well as return performances with the London Philharmonic, The Philadelphia Orchestra and the symphonies of Atlanta, Cincinnati, Detroit, Louisville, Milwaukee, New Jersey, Oregon, Seattle, Utah and Vancouver. Other projects include a return to the Wigmore Hall in London, a recording with the London Philharmonic, a residency with the Bournemouth Symphony, and numerous recital appearances in Germany.

With the addition of the Chicago and Pittsburgh symphonies, Mr. Hadelich will have appeared with every major orchestra and chamber orchestra in the U.S., several on numerous occasions. Festival appearances include his 2015 debuts at Ravinia and the Grand Teton Music Festival, as well as return engagements at Aspen and Bravo! Vail Valley. He has also performed at Blossom, Britt, Chautauqua (where he made his American debut in 2001), Eastern Music Festival, the Hollywood Bowl, Marlboro and Tanglewood.

Mr. Hadelich plays on the 1723 “Ex-Kiesewetter” Stradivari violin, on loan from Clement and Karen Arrison through the Stradivari Society of Chicago.