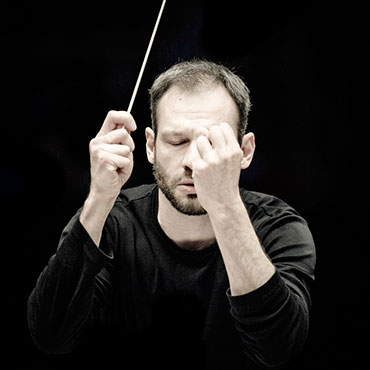 In August 2015, Dima Slobodeniouk was announced as Principal Conductor of the Lahti Symphony Orchestra and Artistic Director of the Sibelius Festival, a position he continues into the 2016-2017 season. Lauded for his deeply informed and intelligent artistic leadership, Slobodeniouk is also Music Director of the Orquesta Sinfonica de Galicia since September 2013i. Combining his native Russian roots with his years of musical study in Finland, Slobodeniouk draws on the powerful musical strengths of these countries.

With his passions for a broad scope of repertoire, he conducts Beethoven, Verdi, Mahler, Siblius, Stravinsky to the modern, including works by Jonathan Harvey, the Catalan composer Benet Casablancas and Magnus Lindberg, including the Spanish premiere of his cello concerto. He explores two song cycles of Unsuk Chin ('Les Silences des Sirenes' and 'SnagS and Snarls'). In spring 2016, the Orquesta Sinfonica de Galica tours with Yefim Bronfman to Madrid and with Javier Perianes to Abu Dhabi.

Passionate about working with young musicians of the future, Slobodeniouk worked with student musicians of the 2015 Verbier Festival, and he begins a conducting initiative with Orquesta Sinfonica de Galicia for a ten day period providing an opportunity for students to work on the podium with a professional orchestra.

This year saw the release of a CD of works of Lotta Wennakoski with the Finnish Radio Symphony Orchestra for the Ondine label. Maintaining an active collaboration with BIS Records, the Finnish composer Sebastian Fagerlund is presented on the BIS label conducted by Slobodeniouk with Gothenburg Symphony Orchestra.

Slobodeniouk, Moscow-born, studied violin at the Central Music School under Zinaida Gileis and J. Chugajev, continuing at the Conservatory's Music Institute, Moscow in 1989, and at the Middle Finland's Conservatory and the Sibelius Academy under Olga Parhomenko. In 1994, participated in the conductors class of Atso Almila. He continued his Sibelius Academy studies under the guidance of Leif Segerstam, Jorma Panula and Atso Almila. He has also studied under Ilya Musin and Esa-Pekka Salonen.