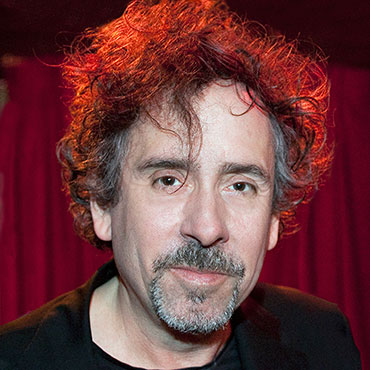 Tim Burton, widely regarded as one of the cinema’s most imaginative filmmakers, has enjoyed great success in both the live-action and animation arenas. Most recently Burton directed and produced the critically acclaimed “Frankenweenie” which was a 2012 Academy Award® nominee for Best Animated Picture.

In 2010, he directed “Alice in Wonderland,” an epic fantasy based on the classic story by Lewis Carroll, and starring Johnny Depp, Helena Bonham Carter, Anne Hathaway, and Mia Wasikowska in the title role. The film earned more than a billion dollars at the worldwide box office, making it the second-highest-grossing release of 2010. “Alice in Wonderland” also received a Golden Globe nomination for Best Picture – Musical or Comedy, and won two Academy Awards®, for Best Art Direction and Best Costume Design.

Burton was previously honored with an Academy Award® nomination for Best Animated Feature for the 2005 stop-motion film “Corpse Bride,” which he directed and produced. He earlier received BAFTA Award and Critics’ Choice Award nominations for Best Director for the acclaimed fantasy drama “Big Fish.” More recently, Burton won a National Board of Review Award and garnered Golden Globe and Critics’ Choice Award nominations for his directing work on “Sweeney Todd: The Demon Barber of Fleet Street,” which also won the Golden Globe for Best Film – Musical or Comedy. Depp earned an Oscar® nomination for his performance in the title role of Burton’s 2007 film adaptation of the Stephen Sondheim musical thriller, also starring Bonham Carter and Alan Rickman.

Burton began his film career in animation, and, in 1982, directed the stop-motion animated short “Vincent,” narrated by Vincent Price, which was an award winner on the film festival circuit. He made his feature film directorial debut in 1985 with the hit comedy “Pee-Wee’s Big Adventure.”

In 1988, Burton helmed the inventive comedy hit “Beetlejuice,” starring Michael Keaton as the title character. He then reteamed with Keaton on the action blockbusters “Batman,” which became the top-grossing film of 1989 and also starred Jack Nicholson as the Joker, and “Batman Returns,” also starring Michelle Pfeiffer and Danny DeVito.

In 1990, Burton directed, co-wrote and produced the romantic fantasy “Edward Scissorhands,” which was acclaimed by both critics and audiences. The film also marked the start of his successful cinematic partnership with Johnny Depp, who delivered a poignant performance in the title role. Their subsequent collaborations include the Burton-directed films “Ed Wood,” also starring Martin Landau in an Oscar®-winning portrayal of Bela Lugosi; “Sleepy Hollow,” adapted from the classic tale by Washington Irving; and the 2005 worldwide smash “Charlie and the Chocolate Factory,” which was based on Roald Dahl’s beloved book and grossed more than $470 million worldwide.

Burton’s additional directing credits include the all-star sci-fi comedy “Mars Attacks!,” which he also produced, and the 2001 remake of “Planet of the Apes,” which marked his first collaboration with producer Richard Zanuck.

Burton also conceived and produced the stop-motion animated feature “The Nightmare Before Christmas,” which remains an enduring holiday favorite. In addition, he has produced such films as “Cabin Boy,” “Batman Forever,” and the animated features “James and the Giant Peach” and “9.”

In 2010, the filmmaker released The Art of Tim Burton, a 430-page book comprising more than 40 years of his personal and project artwork. In November of that year, the Museum of Modern Art (MoMA) opened an extensive exhibit of his work, which went on to tour in Melbourne, Toronto, Los Angeles, Paris, and Seoul.