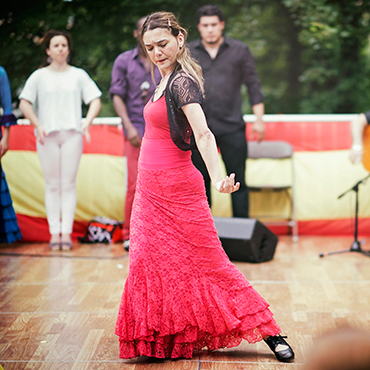 Anna Menendez, originally from Baltimore, Maryland, is a flamenco dancer based in Washington, DC. Anna has performed in over 50 children’s concerts with the Baltimore Symphony Orchestra (BSO). As well as appearing in children’s concerts, the BSO contracted her to perform in their prime time “Symphony with a Twist” series in 2003, 2004 and 2005. In 2003 and 2004, she performed with renowned classical guitarist Manuel Barrueco and in 2005 choreographed Falla’s “El Amor Brujo” which she presented with a company of dancers with the BSO for sold out performances at the Music Center at Strathmore and the Joseph Meyerhoff Symphony Hall.

She has also danced on many local, national and international stages. Anna has appeared as a regular featured dancer and soloist in many of Flamenco Aparicio’s productions at the Gala Hispanic Theater; including “Encuentros,” “Camino al Flamenco,” “Entresuenos,” “Flamenco/Flamenca,” “Uno mas uno” and “Intimo” with Carmela Greco. In October of 2011, Anna and her company “Pastora” performed as a part of Velocity at the Sydney Harman Hall in Washington, DC. A review by the Washington Post described her performance as “virtuosic.”

Most recently Anna has performed as a soloist in the New York and Bucharest, Romania’s productions of “Amores Quebrados” and Flamenco Aparicio’s production of “Intimo” in Managua, Nicaragua.

Anna is a 2003 recipient of the Artistic Fellowship Award from the DC Council for the Arts and Humanities for excellence in flamenco dance.

Anna is a teaching artist with Young Audiences of Maryland and teaches flamenco dance classes at the American Embassy of Dance in Washington, DC.