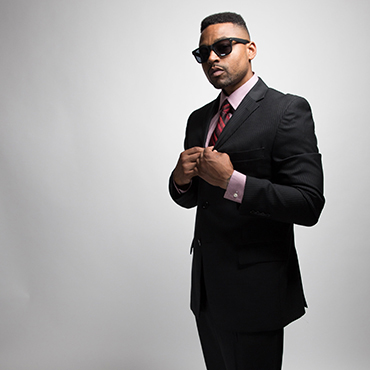 Wordsmith is the always-professional, ever-expanding, world-wide movement based out of Baltimore, MD. His mission is to entertain and educate through a Message of Purpose and always by example relate that message through clean, quality and marketable Music for the Masses.

The emcee from Baltimore looks to represent his city on national and international stages with his Conscious-Commercial Hip-Hop and theatrical stage shows. Free of profanity, full of message driven content and fun for all ages, Wordsmith’s music is considered blue collar to the core.

Making great strides in the independent music scene, Wordsmith was accepted into the Grammy voting committee due to his numerous songwriting credits over the years. His label NU Revolution Entertainment is recognized by his alma mater Salisbury University as a certified alumni business. Major accomplishments include a recent feature in the Baltimore Sun Newspaper Fall Arts Guide, joining forces with Armed Forces Entertainment for a 19 day overseas concert tour that included bases in Djibouti, Qatar, UAE, Kuwait and Bahrain.  Wordsmith followed that up by joining the Maryland leg of the Special Olympics Unified Relay Tour, garnering features with CBS News Baltimore WJZ for his role in the inaugural Light City Baltimore, DC Spotlight Newspaper and selected out of 300 ensembles to take part in the upcoming American Music Abroad Tour sponsored by the US Department of State.

Wordsmith has developed corporate approval through the licensing of over 30 songs for film, television, internet video, video games and advertisement purposes with companies like NFL Network, CBS, NBC, Fox, Style, Bravo, Nintendo Wii and many more.  Recent ad placements include Wordsmith’s “Happy Hour the Universal Blackout” used in Kicks promo ad, while providing the soundtrack to the amazing documentary Road trip Nation: Ready Rise.  Other placements include “We Do It Better” featured in Red Bull’s Street Skating Mystic Sk8 Cup, “On My Job” appearing on NFL Networks Top 100 Players 2015 and “Eye for the Spotlight” used in ESPN’s Sportscenter in Review show to name a few. Film placements include the movies Hollidaysburg and Slow Learners.

Four years running, Wordsmith earned the ASCAPLUS award from his PRO Society for his extensive catalog of licensed music. Wordsmith’s catalogue of music is available on the major internet station Pandora, while his recent album Apt. 507 is available everywhere digitally and physically at major locations like Target.com and BestBuy.com.

For Wordsmith, music is a constant balance of art and business where to be successful means always looking to further both at once. NU Revolution has capitalized off Wordsmith’s good reputation and growing fan base by securing professional clothing sponsorships with local outlet Route One Apparel and international outfitter Rude Boy Clothing. Wordsmith and his NU Revolution brand are steady growing with the help of these new business partners.

Wordsmith has made charitable contributions a pillar of his NU Revo label and performances are just the beginning. For four years running, Wordsmith has been the performing artist for students at local inner-city schools for the annual Red Day festival sponsored by Open Door Baltimore and Keller Williams. Recently Wordsmith started entering middle schools to deliver Anti-Bully lectures/performances along with joining Baltimore based homeless shelter Project Plase to feed and provide gifts to their clients.