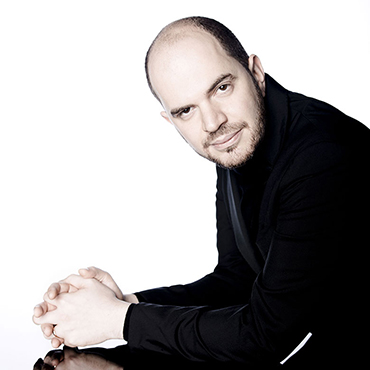 The multifaceted pianist Kirill Gerstein is rapidly ascending into classical music’s highest ranks. With a masterful technique, discerning intelligence and a musical curiosity that has led him to explore repertoire spanning centuries and numerous styles, he has proven to be one of today’s most intriguing and versatile musicians.

Mr. Gerstein is the sixth recipient of the prestigious Gilmore Artist Award, presented every four years to an exceptional pianist who, regardless of age or nationality, possesses broad and profound musicianship and charisma and who desires and can sustain a career as a major international concert artist. Mr. Gerstein was also awarded First Prize at the 2001 Arthur Rubinstein Piano Competition in Tel Aviv and received a 2002 Gilmore Young Artist Award and a 2010 Avery Fisher Grant.

Kirill Gerstein’s recent North American engagements include performances with the Philadelphia and Minnesota Orchestras, the Los Angeles Philharmonic and the Chicago, Toronto, San Francisco, Cincinnati, Houston, Dallas and Montreal symphonies among others. He has also recently appeared at Tanglewood with the Boston Symphony, Blossom with the Cleveland Orchestra, the Aspen Music Festival and the Santa Fe Chamber Music Festival. Internationally, Kirill Gerstein has played with such prominent European orchestras as the Berlin Philharmonic and the Royal Concertgebouw Orchestra, the Munich, Rotterdam and London Philharmonics, Dresden Staatskappelle, Finnish Radio Orchestra, Tonhalle Orchestra in Zurich and the Czech Philharmonic, both in Prague and on tour. He has performed recitals in Paris, Prague, Hamburg, London’s Wigmore Hall and Queen Elizabeth Hall, and at the Liszt Academy in Budapest. His European festival appearances include performances at the Salzburg Festival as well as at Verbier, the Lucerne Festival, the Proms in London and the Jerusalem Chamber Music Festival.

Mr. Gerstein records for Myrios Classics. His solo recordings feature Mussorgsky’s Pictures at an Exhibition and Schumann’s Carnaval, and his recording of works by Schumann, Liszt and Oliver Knussen was chosen by The New York Times as one of the best recordings of 2010. His first orchestral recording of the Tchaikovsky Piano Concerto No. 1 and the Prokofiev Piano Concerto No. 2 with the Deutsches Symphonie-Orchester Berlin, was released by Myrios in March 2015 and is the first recording using the new critical edition of Tchaikovsky Piano Concerto No. 1 recently completed by the Tchaikovsky Museum in Moscow using the composer’s original second version. His most recent recording for the Myrios label is Liszt’s Complete Transcendental Études, while upcoming recording plans include Gershwin’s Rhapsody in Blue and Concerto in F with the St. Louis Symphony, David Robertson conducting.

Born in 1979 in Voronezh, Russia, Mr. Gerstein studied piano at a special music school for gifted children and taught himself to play jazz by listening to his parents’ extensive record collection. At the age of 14, he came to the United States to study jazz piano as the youngest student ever to attend Boston’s Berklee College of Music. After completing his studies in three years and following his second summer at the Boston University program at Tanglewood, Mr. Gerstein turned his focus back to classical music and moved to New York City to attend the Manhattan School of Music, where he studied with Solomon Mikowsky and earned both Bachelors and Masters of Music degrees by the age of 20. He continued his studies in Madrid with Dmitri Bashkirov and in Budapest with Ferenc Rados.

Mr. Gerstein became an American citizen in 2003 and divides his time between the United States and Germany.