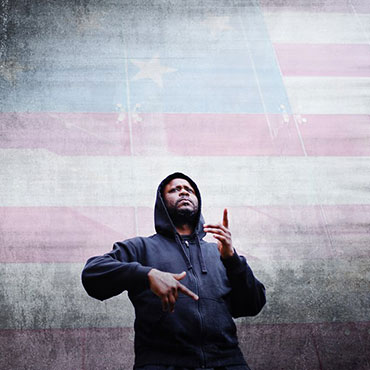 With over 30 years of experience, Dominic "Shodekeh" Talifero is a groundbreaking Beatboxer & Vocal Percussionist who pushes the boundaries of the human voice. He currently serves as Faculty, Musical Accompanist & Composer for Towson University's Department of Dance and is the founding director of "Embody, A Music Series of the Vocal Arts," which strives for artistic and cultural unity through the many vocal traditions from the world from opera, throat singing, to beat boxing. Beatboxing is a form of Vocal Percussion of Hip Hop Culture. Imitating & often replacing a drum set, drum machine or drum loop through a series of vocal effects or percussive sounds primarily produced by the larynx, nasal & oral cavities, Beatboxing exemplifies the Hip hop Philosophy of creating meaningful artistic expressions with limited resources at its most extreme; it replaces the source of the timeless Break Beat - with the Human Voice. Beatboxing has become a ubiquitous feature of the American city experience & soundscape. In recent years, Mr. Talifero has moved from Beatboxing's Hip Hop roots to explore innovative collaborations with a wide range of traditional artists, including Tuvan Throat Singing, Lithuanian Folk Music, Experimental, Funk, Jazz, Rock, Classical, Ballet & various forms & techniques of Modern Dance. He is constantly striving to rhythmically channel the vast spectrum of sounds around him, not just through Music, but via the channels of Science, Culture, History, Mathematics & Ethnomusicology.