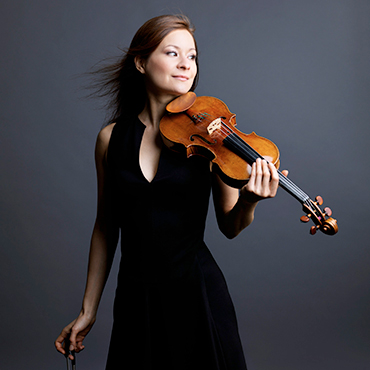 “Balanced lyricism and fire [...]. Among her assets are a finely polished technique and a beautifully varied palette of timbres“ (Allan Kozinn / The New York Times)

Arabella Steinbacher is celebrated as one of today’s leading violinists, since she gave her outstanding debut with the Orchestre Philharmonique de Radio France under Sir Neville Marriner in Paris in 2004.

In the 2016-2017 season, Arabella Steinbacher will appear as Principal Guest Artist in the concert series of the Frankfurter Museums-Gesellschaft and play with the Frankfurter Museumsorchester under Hartmut Haenchen. Highlights of the season include her first tour with the Oslo Philharmonic and Vasily Petrenko throughout Europe, performances of Hindemith’s violin concerto with the San Francisco Symphony under Marek Janowski, with the Danish National Symphony Orchestra under Fabio Luisi as well as the RSB Berlin Radio Symphony Orchestra and Vladimir Jurowski among others. She will also appear in recitals with her longtime duo-partners Robert Kulek and Peter von Wienhardt.

As CARE ambassador, Arabella Steinbacher continually supports people in need. In December 2011, she toured though Japan commemorating the tsunami catastrophe of the same year. The DVD “Arabella Steinbacher – Music of Hope” with her recordings of this tour was later released by the label Nightberry.

On her new CD “Fantasies, Rhapsodies and Daydreams” Arabella Steinbacher revisits an earlier musical era, in which playing famous virtuosic pieces by Camille Saint-Saëns, Maurice Ravel, Ralph Vaughan Williams, Pablo de Sarasate, Jules Massenet and Franz Waxman was very common. The Orchestre Philharmonique de Monte-Carlo, under the baton of Lawrence Foster, accompany her on this album released by Pentatone Classics. Earlier recordings include a Mozart album with the Festival Strings Lucerne, a CD with sonatas by Richard Strauss and Cesar Franck with pianist Robert Kulek and her last recording by Pentatone Classics in collaboration with the Orchestre de la Suisse Romande and Charles Dutoit with violin concertos by Mendelssohn and Tchaikovsky. Among many international and national music prizes and nominations, she was awarded with the ECHO Klassik twice.