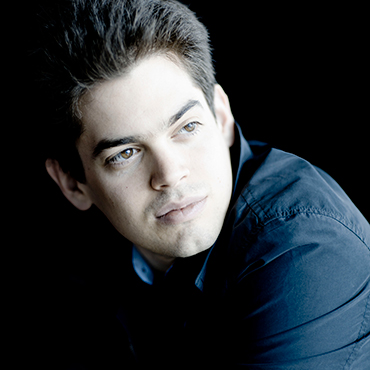 Prodigiously gifted 27 year old Israeli conductor Lahav Shani’s conducting career was launched when he won first prize at the 2013 Gustav Mahler International Conducting Competition in Bamberg. Since then he has quickly established himself as one of the most talked about young conducting talents making a huge impression with his astonishing maturity and natural, instinctive musicality.

In January 2016, Shani stood in for Philippe Jordan conducting the Vienna Symphony Orchestra on a major European tour including concerts in Paris, Frankfurt and Munich.

In the 2017-2018 season, Shani will become Principal Guest Conductor of the Vienna Symphony Orchestra. In June 2014, Shani made a sensational debut in Berlin, replacing Michael Gielen, with the Berlin Staatskapelle with concerts at the Berlin Konzerthaus and the Berlin Philharmonie. He returns to conduct the orchestra for four performances of La Bohème in December 2016 at the Berliner Staatsoper and for orchestral concerts in the Berlin Philharmonie in May 2017. In December 2015, Shani stepped in, at short notice, for an indisposed Franz Welser-Moest for concerts with the Vienna Philharmonic in the Musikverein when he directed Bach: Concerto in D minor from the keyboard and conducted Mahler Symphony No. 1 winning high praise from the critics and a standing ovation from the public.

In October 2013, Shani was invited to open the season of the Israel Philharmonic Orchestra – Globes, reviewing one of the performances, wrote that “this concert will be remembered as a dizzying, perhaps even historic event in the history of the Israel Philharmonic.” An immediate re-invitation followed for the next two seasons. His close relationship with the Israel Philharmonic started in 2007 when he performed Tchaikovsky's Piano Concerto under the baton of Zubin Mehta, and continued in 2010 when he joined Mehta and the orchestra on tour in Asia, where he participated as solo pianist, conductor’s assistant and as double bass player.

Shani was born in 1989 in Tel Aviv. He started his piano studies at six with Hannah Shalgi, and continued with Prof. Arie Vardi at the Buchmann-Mehta School of Music in Tel Aviv. He then went on to complete his studies in conducting with Prof. Christian Ehwald and piano with Prof. Fabio Bidini, both at the Academy of Music Hanns Eisler Berlin. In recent years he has been mentored by Daniel Barenboim.