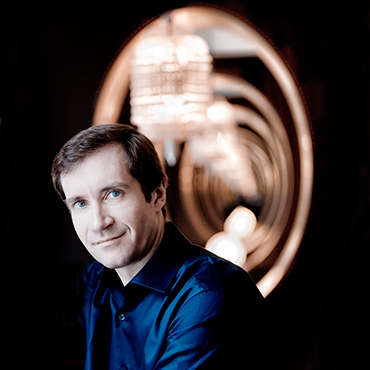 Capable of great refinement and sensitivity in Mozart and Chopin, and breathtaking virtuosity and “crystalline beauty” (The Financial Times) in Rachmaninov and Prokofiev, Nikolai Lugansky is a pianist of extraordinary depth and versatility.

Continuing a long-standing relationship, Lugansky will partner with St. Petersburg Philharmonic and Yuri Temirkanov on a North American tour in February 2017. Concerto highlights for the 2016-2017 season include debuts with the Berlin Philharmonic and Vienna Symphony and return engagements with the Philharmonia Orchestra, Orchestre National de France, Philadelphia Orchestra, St. Louis Symphony and the Tokyo Metropolitan Symphony. He continues his cycle of the complete Prokofiev Piano Concerti with the Royal Scottish National Orchestra to celebrate the 125th anniversary of the composer's birth.

Upcoming recital and chamber music performances include the Alte Oper Frankfurt, London’s Wigmore Hall, Paris’ Théâtre des Champs-Elysées, Geneva, Budapest, the Great Hall of the Moscow Conservatoire and the Great Hall of the St Petersburg Philharmonia. His chamber music collaborators include Mischa Maisky, Vadim Repin and Alexander Kniazev. Lugansky regularly appears at some of the world's most distinguished festivals, including in the coming season, La Roque d’Anthéron, Verbier, Tanglewood, Aspen and Ravinia.

An award winning recording artist, Nikolai Lugansky records exclusively for the Naïve-Ambroisie label. His recital CD featuring Rachmaninov's Piano Sonatas won the Diapason d’Or and an ECHO Klassik Award while his recording of concertos by Grieg and Prokofiev with Kent Nagano and the Deutsches Symphonie-Orchester Berlin was a Gramophone Editor’s Choice. His earlier recordings have also won a number of awards, including a Diapason d'Or, BBC Music Magazine Award and ECHO Klassik prize. Lugansky’s most recent disc of music by Schubert was released in 2016 with a new recording of Tchaikovsky due for release in 2017.

Lugansky is Artistic Director of the Tambov Rachmaninov Festival and is also a supporter of, as well as a regular performer at, the Rachmaninov Estate and Museum of Ivanovka. He studied at Moscow’s Central Music School and the Moscow Conservatoire where his teachers included Tatiana Kestner, Tatiana Nikolayeva and Sergei Dorensky. He was awarded the honor of People’s Artist of Russia in April 2013.