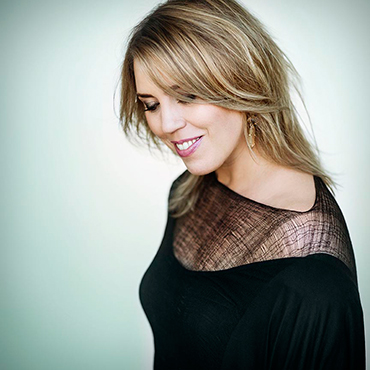 In addition to her brilliant interpretations of the core piano repertoire, Gabriela is also celebrated for her ability to improvise, composing and playing new works in real time. She says, “I connect to my audience in a completely unique way – and they connect with me. Because improvisation is such a huge part of who I am, it is the most natural and spontaneous way I can express myself.” Whether in recital or following a concerto performance, Gabriela regularly invites her audiences to choose themes on which she improvises.

Gabriela is also an award-winning and bestselling recording artist. Her most previous album, released in summer 2015 on the Orchid Classics label, featured Rachmaninov’s Piano Concerto No. 2, her own composition Ex Patria and her signature improvisations, winning the artist her first Latin Grammy® for Best Classical Album (Mejor Álbum de Música Clásica). Previous recordings include Bach and Beyond, which held the top spot on the Billboard Classical Charts for several month and garnered her two Echo Klassik Awards: the 2006 Keyboard Instrumentalist of the Year and 2007 Award for Classical Music without Borders. She also received a Grammy® nomination for her Bach and Beyond follow-up, Baroque, in 2008 and in 2010, released Solatino, an album inspired by her Venezuelan homeland and devoted to works by Latin American composers and her own interpretations on Latin themes.

Following a long held desire to apply her abilities in improvisation to formal composition, Gabriela debuted as a composer in 2011 with Ex Patria, a tone poem for piano and orchestra and her emotional response to Venezuela’s descent into lawlessness, corruption and violence. Her piece had its world premiere tour in October of that year with the Academy of St. Martin in the Fields and in 2015 was recorded and released internationally with the YOA Orchestra of the Americas and conductor Carlos Miguel Prieto.

A staunch advocate of human rights whose voice increasingly reaches beyond the classical music sphere, Gabriela was recently named an Honorary Consul by Amnesty International and was also selected as a Nominee for Outstanding Work in the Field of Human Rights by the Human Rights Foundation, all in recognition of her ongoing commitment to human rights issues in Venezuela and beyond. She was invited to participate in the 2013 Women of the World Festival, held at London’s Southbank Centre, and has spoken and performed twice at the World Economic Forum in Davos-Klosters (Switzerland). She was also awarded the 2012 Rockefeller Award for her contribution to the arts and was a featured performer at Barack Obama’s 2008 Presidential Inauguration.

Born in Venezuela, Gabriela gave her first public performance at the age of five. Aged eight, she made her concerto debut in her hometown of Caracas, which led to a scholarship from the government to study privately in the USA. She continued her studies under Hamish Milne at the Royal Academy of Music in London, graduating with the highest honours. She currently resides in Barcelona with her husband and two daughters.