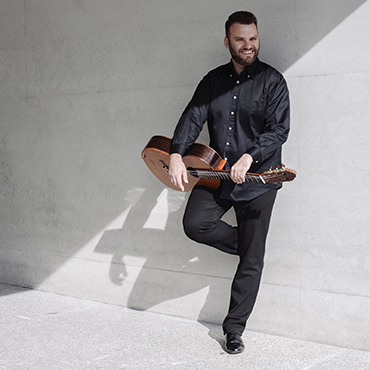 Guitarist Łukasz Kuropaczewski, described by the critics as “Monet of the guitar,” has become a major figure on the worldwide classical music scene. Born in the small Polish town of Gniezno, Łukasz began studying guitar at the age of ten. At thirteen, his early talent brought him to the attention of the distinguished guitar teacher Piotr Zaleski, with whom he studied from 1994-2003.

Upon receiving a Master’s degree from the Academy of Music in Wroclaw, Poland, Lukasz was invited to attend the exclusive studio of Maestro Manuel Barrueco the Peabody Conservatory of the Johns Hopkins University­ — on a full scholarship — and was awarded the prestigious Artist Diploma in 2008. Since then, Łukasz has performed concerts around the world, demonstrating his remarkable passion and precision to enthusiastic audiences. Maestro Barrueco said after attending one of his recitals: "Łukasz gave the most dramatic, dynamic, and emotional recital I believe I have ever witnessed."

Always in great demand as a recitalist and as soloist with orchestras, he has been invited to perform in numerous festivals in countries including France, Spain, Germany, Hungary, Slovakia, the Czech Republic, Iceland, Greece, Bulgaria, Japan, China, Canada, Mexico, Panama and the United States.

An avid chamber music collaborator, he frequently performs with the Orion String Quartet, mandolin player Avi Avital, Chen Reiss, Richard Galliano, as well as members of The Cleveland Orchestra, the Los Angeles Philharmonic and the San Antonio Symphony, in a wide range of works from Vivaldi to Boccherini.

Łukasz has inspired many composers to write work for his instrument. He premiered a guitar quintet, “Acequias,” by Marc Neikrug at the Santa Fe Chamber Music Festival and his “Three Pieces for Guitar” at the Baltimore Museum of Art in Baltimore, MD. He has premiered concertos by Angelo Gilardino, Krzysztof Meyer, Mikolaj Gorecki and Alexandre Tansman (Polish premiere), and he made the guitar version of Krzysztof Penderecki’s Viola Concerto and premiered it with Sinfonia Varsovia and conductor Maximiano Valdes in the spring of 2016. Performances of Penderecki’s concerto are planned with Puerto Rico Symphony and the Chile Symphony Orchestra in Santiago, Chile.

Łukasz Kuropaczewski was a guitar faculty at University of Pennsylvania from 2008-2010. Currently, he is on the faculty of the Academy of Music in Poznan, Poland, holding a doctorate degree in performance. He is also the artist director of the Polish Guitar Academy Festival held in Poznan every year.

“Kuropaczewski understands music like nobody else does and he seems to love what he does.” (Gazeta Wyborcza, Poland)