JOSEPH SCHWANTNER New Morning for the World (Daybreak of Freedom)

New Morning for the World (Daybreak of Freedom)

American composer Joseph Schwantner won the 1979 Pulitzer Prize for Music for his orchestral work Aftertones of Infinity and in 1981 took the first prize at the equally prestigious Kennedy Center Friedheim Awards for a chamber work Music of Amber. But he is most famous today for another piece: his symphonic setting of the words of Martin Luther King, Jr., New Morning for the World, which he composed in 1982. Since its premiere by the Eastman Philharmonia in January 1983 in Rochester, New York and following that at the Kennedy Center, it has taken its place alongside another famed work for orchestra and narrator — Aaron Copland’s A Lincoln Portrait of 1942 — as the musical centerpiece of choice for many official American celebrations.

The idea for this work originally came from Robert Freeman, director of the Eastman School, who suggested that Schwantner consider writing a work using the former star first baseman of the Pittsburgh Pirates, Willie Stargell, as narrator. Schwantner decided to create a work based on excerpts from King’s eloquent, visionary speeches as a memorial to “a man of great dignity and courage, whom I have long admired.” He worked closely with Stargell to compile the text, which draws on many of King’s most renowned utterances, including “How long, not long” and “I Have a Dream.” After Stargell narrated the premiere performances, countless other prominent African Americans have lent their voices to the work.

While A Lincoln Portrait certainly provided inspiration for the musical style of New Morning, Schwantner’s orchestral writing is much more elaborate, sumptuously colorful, and harmonically adventurous than Copland’s, and there are long passages without the narrator in which the orchestra makes its own powerful commentary about the meaning of King’s words and life. Schwantner is a brilliant orchestrator with a special love for percussion instruments; he has also written a superb and often performed Percussion Concerto. In this score, he creates wonderful, glistening mixtures of bell-like percussion — such as the celesta, glockenspiel, vibraphone, and harp — with woodwinds. 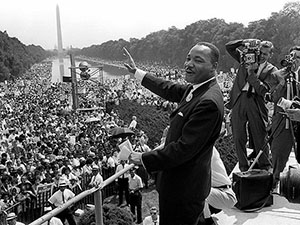 New Morning is built from an upward-rocketing fanfare motive, which refracts the colorful prisms of different instrumental combinations and can be both viscerally dramatic and delicately ethereal. The central section, surrounding the words “Now is the time to make real the promises of democracy,” features beautiful, elegiac music for the strings alone, singing a vision of “the sunlit path of racial justice.”

This is succeeded by King’s famous “How long, not long” sequence and an exhilarating struggle powered by drums and the brass section. The music then becomes calm and quiet for the words from King’s great “I Have a Dream” speech, and the visionary hope of these words is echoed in the radiant closing music, with its shimmering percussion bells and wordless humming by the musicians.