RACHMANINOFF Rhapsody on a Theme of Paganini

Rhapsody on a Theme of Paganini

Listen to the podcast 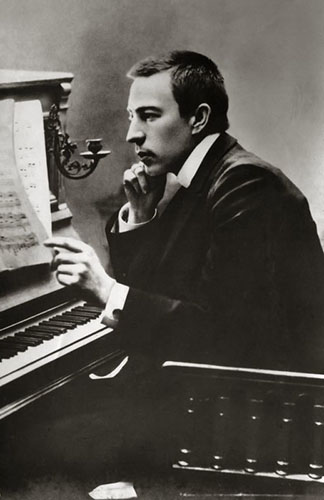 One of the proudest moments in Baltimore's musical history came on November 7, 1934 when Sergei Rachmaninoff played the world premiere of his newly composed Rhapsody on a Theme of Paganini, with The Philadelphia Orchestra at the Lyric Opera House. Rachmaninoff was in America because the Russian Revolution had forced him to flee his native land at age 44 and begin his career again in the West. Once primarily a composer and conductor, he now became a touring piano virtuoso — one of the 20th century's greatest — in order to support his family. America, with its insatiable demand for his concert appearances, made him richer than he'd ever been in Russia. But he never got over his homesickness.

His music, too, remained rooted in Russia. And while audiences loved his lushly Romantic melodies, many critics scorned him as out of date. Ruefully, he wrote: “Perhaps I feel that the kind of music I care to write is not acceptable today. ... For when I left Russia, I left behind me the desire to compose: losing my country I lost myself also. To the exile whose musical roots, traditions, and background have been annihilated, there remains no desire for self-expression.”

But the desire for self-expression did remain, and in 1934 it produced the brilliantly imaginative Paganini Rhapsody. The work sprang from the 24th Caprice for unaccompanied violin by a virtuoso of another age and instrument, Nicolò Paganini (1782–1840). Rachmaninoff took Paganini's spry two-part tune and built 24 highly contrasted variations on it. Most of these whiz by at high speed, so listeners should not struggle to keep count, but simply absorb the work as a continuous flight of fancy. Providing structural shape, Rachmaninoff grouped the variations into three larger units, making a mini-concerto: variations one through ten forming a fast “movement,” 12 through 18 a slow movement, and 19 through 24 a virtuoso finale.

A theme-and-variations composition usually begins with a full presentation of the theme itself. But here Rachmaninoff gives a witty “preview” — just the teasing first notes of each measure — before the violins sing the theme for us. At the seventh variation, the tempo slows a bit, and the piano intones in stark chords the melody of the “Dies Irae” chant from the Catholic mass for the dead; this somber tune was a signature theme throughout Rachmaninoff's music. It returns again in the tenth variation amid dazzling orchestral music, along with some syncopated brass writing that sounds more New York than Russia.

The 12th variation opens the middle section with a dream-like minuet in 3/4 time. The shadows deepen in the 16th and 17th variations as the piano gropes for light at the end of the tunnel. This is gloriously achieved in the golden sunlight of the 18th variation, the work's most beloved and surely one of the most gorgeous tunes ever written. From this tranquil oasis, the music builds in speed, excitement, and virtuoso display for the soloist until the charming surprise ending.