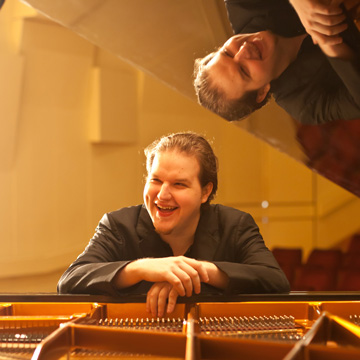 The indisputable winner of the International Queen Elisabeth Piano Competition 2016, Lukáš Vondráček, has an exciting 2018/19 season ahead of him. It sees him work with the hr-Sinfonieorchester, Pittsburgh Symphony Orchestra under the baton of Juraj Valčuha, BBC National Orchestra of Wales with Xian Zhang and Orchestre national de Lorraine. He will return to the Royal Scottish National Orchestra, Prague Radio Symphony Orchestra, Janáček Philharmonic Orchestra and Orquestra Sinfônica do Estado de São Paulo. Recitals will take him to the Flagey in Brussels, Società Filarmonica de Trento, Vancouver Chopin Society, Philharmonie Haarlem, Casa da Música in Porto and to Deutschlandfunk Cologne.

Recent highlights include concerts with Tokyo Metropolitan Symphony Orchestra at Tokyo’s Suntory Hall, Netherlands Philharmonic Orchestra at Amsterdam’s Concertgebouw and Baltimore Symphony, Sydney Symphony, and Oslo Philharmonic orchestras and National Orchestra of Belgium amongst others; as well as recitals at Wiener Konzerthaus, Hamburg’s Elbphilharmonie, the Louvre, Concertgebouw and festivals such as PianoEspoo in Finland.

Lukáš Vondráček made his first public appearance at the age of four. His debut as a fifteen-year-old in 2002 with the Czech Philharmonic Orchestra and Vladimir Ashkenazy was followed by a major US tour in 2003. His natural and assured musicality and remarkable technique have long marked him out as a gifted and mature musician. He has worked with conductors including Paavo Järvi, Gianandrea Noseda, Yannick Nézet-Séguin, Marin Alsop, Christoph Eschenbach, Pietari Inkinen, Vasily Petrenko, Jakub Hrůša, Anu Tali, Xian Zhang, Krzysztof Urbański, Stéphane Denève and Elim Chan.

Previous highlights include concerts with The Philadelphia Orchestra, St Petersburg Philharmonic, the Philharmonia and New Jersey Symphony orchestras as well as recitals at the Mariinsky Theatre, in Mumbai, Singapore, Leipzig’s Gewandhaus, at Brussel’s Flagey and the Menuhin Festival Gstaad.

Following studies at the Academy of Music in Katowice and the Vienna Conservatoire, Lukáš Vondráček obtained an Artist Diploma from Boston's New England Conservatory under the tutelage of Hung-Kuan Chen, graduating with Honours in 2012.

His first commercial recording, a solo album for Octavia Records, was released in 2004 followed by another recital disc in 2012. His most recent CD, a recording of works by Brahms was released in autumn 2013 on the ORF label.