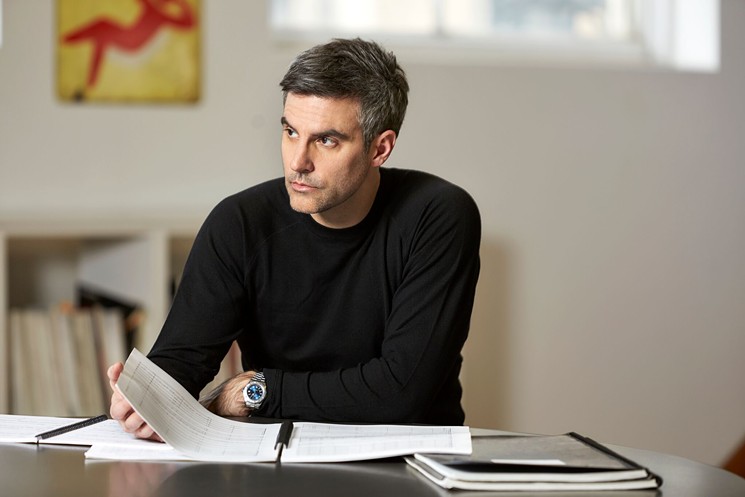 To celebrate its 100th anniversary in 2016, the BSO turned to composer Kevin Puts to create a new work, The City (which was also co-commissioned by Carnegie Hall to salute its own 125th anniversary). Puts was hardly a surprising choice, for not only has he been on the faculty of the Peabody Institute since 2006, but over that decade he has become one of the nation’s most sought-after composers, distinguished for his vibrantly expressive music in a wide variety of genres. And his Network, River’s Rush, and Symphony No. 4, “From Mission San Juan,” had already been popular visitors to the Meyerhoff stage.

Puts’ opera Silent Night, premiered at the Minnesota Opera in 2011, won the 2012 Pulitzer Prize for Music and has subsequently been produced at major houses in the United States, Canada, and Europe. In 2015, he followed this success with another opera for Minnesota, The Manchurian Candidate based on Richard Condon’s famous novel, which also was an extraordinary success with audiences and critics.

This past June, Puts’ new Oboe Concerto, “Moonlight,” was premiered by Katherine Needleman at the BSO’s New Music Festival and now makes its subscription season debut. Kevin Puts explains how it came into being:

“Immediately following her performance of the beautiful Oboe Concerto by Christopher Rouse at the Cabrillo Festival of Contemporary Music in August 2016, I approached Katherine Needleman about doing a project together, and to my great delight, she was enthusiastic.

“When it came time to compose the piece, I had just finished work on my third opera, Elizabeth Cree. It was October 2016. All eyes were focused on the coming election, and it seemed — in light of her considerable lead in the polls — that Hillary Clinton would be the next president.

“The shock to my system that followed made it hard to approach the writing of abstract music from the perspective to which I had grown accustomed — that is, with confidence in the essential good in humanity. I had never avoided dark moments in my music, but I usually emerge ‘in the light.’ After November 8, 2016, a profound disillusionment overcame me, especially since it had felt for the past eight years that we were on a path to greater tolerance, understanding, and reason. The election had revealed — not withstanding legitimate feelings of economic desperation — a festering ugliness and fear-based hate across much of the country. Without the aid of a libretto to guide me, where was the music to come from?

“On a cross-country flight a few months later, I discovered the 2016 film Moonlight in the inflight entertainment guide. I knew only that it had recently won the Academy Award for Best Picture. It was partly through my emotional response to this beautiful film — which follows the life of a young, tormented gay man with an addict for a mother who is taken in and befriended by a drug dealer and his girlfriend — that I found my way back into writing music. The film is divided into three parts as it chronicles three stages in the life of its main character — youth, adolescence, and early adulthood.

"My concerto is also in three parts. I call the first movement (and the whole piece ‘Moonlight’ because … why not? Beethoven did it. Anyway, I heard this opening music every time I thought of the film, though it does not sound like the soundtrack of the film.

“The second part, ‘Folly,’ is a musical exploration of duplicity, deception, and downright absurdity. It is at turns insidious and grotesque, obsessively hanging onto a two-note motive throughout.

“Theodore Roethke wrote: ‘In a dark time, the eye begins to see.’ I continue to strive for vision and understanding in the midst of our great national division.

“My most sincere gratitude and admiration go to Katherine Needleman for her guidance in shaping the oboe part, and to Bette and Joseph Hirsch for their friendship and generous support for this project. And as always to Marin Alsop for her belief in my work.”