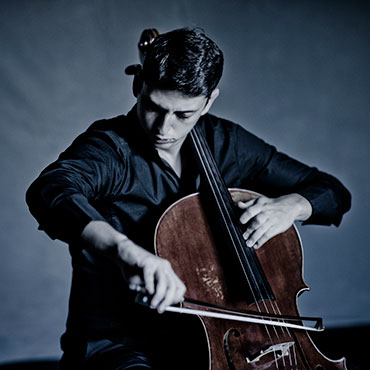 Since winning the Cello First Prize and Gold Medal at the XIV International Tchaikovsky Competition in 2011 at the age of 22, Narek Hakhnazaryan has performed with major orchestras across the globe and has established himself internationally as one of the finest cellists of his generation. Hakhnazaryan has earned critical acclaim worldwide, with The Strad describing him as “dazzlingly brilliant” and the San Francisco Chronicle hailing his performing as “nothing short of magnificent”.  In 2014 he was named a BBC New Generation Artist and in August 2016 he made his highly distinguished and critically acclaimed BBC Proms debut.

In the 2017-2018 season, Hakhnazaryan tours North America with more than a dozen performances of diverse orchestral and recital repertoire. Highlights include two concerts of Tchaikovsky’s Nocturne for Cello and Orchestra and Variations on a Rococo Theme with Hannu Lintu conducting the St. Louis Symphony, a tour with the Moscow State Symphony Orchestra led by Pavel Kogan with performances of the Schumann Cello Concerto at Michigan State University’s Wharton Center, University of Connecticut’s Jorgensen Center for the Performing Arts, SUNY Purchase, and University of Florida Performing Arts, and the Shostakovich Cello Concerto with the Erie Philharmonic conducted by Daniel Meyer. Additional highlights include a live radio broadcast at the Dame Myra Hess Concert Series in Chicago. Hakhnazaryan also gives several recitals with pianist Noreen Polera, performing lush, vibrant programs of Albeniz, Brahms, Cassado, Ligeti, Massenet, Schedrin and Tsintsadze among others with San Francisco Performances, the Royal Conservatory in Toronto, the National Gallery of Art in Washington DC and the Peoples’ Symphony Concerts series in New York. Internationally, Hakhnazaryan gives a recital at the Vienna Konzerthaus with Pavel Kolesnikov and recitals throughout Germany and in London’s esteemed Wigmore Hall with pianist Oxana Shevchenko. He makes his debut with the Royal Liverpool Philharmonic, Norway’s Stavanger Symphony, and at the Dresden Music Festival, and he returns to Ireland’s RTE National Symphony Orchestra.  The cellist is Artist-in-Residence with the Malta Philharmonic, and he tours the UK, China and Hong Kong with the Z.E.N. Piano Trio with colleagues Zhou Zhang and Esther Yoo.

Hakhnazaryan’s previous season included debuts with the Royal Stockholm Philharmonic Orchestra, Utah Symphony, Berlin Konzerthaus, Netherlands Philharmonic, Teatro Dell’Opera (Rome), Munich Chamber, and Essen Philharmonic orchestras, with returns to the Kansas City and New Zealand Symphony Orchestras, BBC Philharmonic, Orchestre della Toscana and to the Warsaw Easter Festival. He has performed concertos with the Detroit, Chicago, Seattle, Milwaukee, Toronto, London, Sydney, and NHK Symphony Orchestras, Los Angeles Chamber Orchestra, Aspen Music Festival Orchestra, the Rotterdam, Czech, and Seoul Philharmonics, the Frankfurt Radio Orchestra, and l’Orchestre de Paris, among others, and he has appeared with acclaimed conductors such as Gergiev, Guerrero, Hrůša, Koopman, Neemi Järvi, Pletnev, Slatkin, Sokhiev, Robertson and Bělohlávek. In 2015 he made a hugely successful debut with the Los Angeles Philharmonic and Lionel Bringuier at the Hollywood Bowl and toured Spain with the WDR Symphony Orchestra Cologne and Jukka-Pekka Saraste, and in Summer 2017 he toured Southeast Asia with concerts in Taipei, Seoul, Kyoto and Tokyo, which included a performance of the six Bach Cello Suites.

Narek Hakhnazaryan was born in Yerevan, Armenia, into a family of musicians: his father is a violinist and his mother a pianist. Mentored by the late Rostropovich, Hakhnazaryan received an Artist Diploma from the New England Conservatory of Music in 2011 where he studied with Lawrence Lesser. Prior to this he studied at the Moscow Conservatory with Alexey Seleznyov and at the Sayat-Nova School of Music in Yerevan with Zareh Sarkisyan.