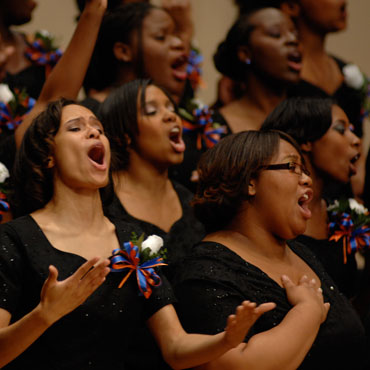 The Morgan State University Choir is one of the nation’s most prestigious university choral ensembles. The choral forces of this critically acclaimed choir include The University Choir, which is over 120 voices strong, and The Morgan Singers – approximately 40 voices. While classical, gospel, and contemporary popular music comprise the choir’s repertoire; the choir is noted for its emphasis on preserving the heritage of the spiritual, especially in the historic practices of performance.
The Morgan State University Choir has performed for audiences throughout the United States and all over the world – including Virgin Islands, Canary Islands, Canada, Africa, Asia and Europe. One of the Choir’s most historic moments came with the opportunity to sing under the baton of Robert Shaw, conducting the Orchestra of St. Lukes and joined by Jessye Norman and others in Carnegie Hall’s One Hundredth Birthday Tribute to Marian Anderson. A major milestone and historical movement occurred in the 1996-1997 season with the sounds of the “Silver Anniversary” concert being broadcast into households throughout the state of Maryland. The concert won three Emmy Awards for Maryland Public Television (MPT).

Known for their consistency of excellent performances, the Choir probably performs with more major orchestras of the United States than any other university choir. During the 1999-2000 season, the Choir was featured with the New York Philharmonic Orchestra in a (then) newly commissioned work for the millennium, “All Rise,” by Wynton Marsalis. The Choir reprised “All Rise” in Prague, in October 2000 and recorded it with the Lincoln Center Jazz Orchestra; the Los Angeles Philharmonic; and in 2003, the Choir recorded it in Paris. In December 2003 the Choir performed “African Portraits” with the Baltimore Symphony at the Gala Concert for the Reginald F. Lewis Museum of Maryland African American History & Culture. In their May 2004 issue, Reader’s Digest named the Morgan State University Choir “the Best College Choir in the U.S.’ in its list of “America’s 100 Best.”

In February 2005, at the personal invitation of Secretary of State Condeleeza Rice, the choir performed for the State Department for their annual African American History Month Celebration. In October of the same year, the Morgan State University Choir sang for the service honoring Rosa Parks, the unassuming matriarch of the civil rights movement, who became the first woman to lie in honor at our nation’s Capitol Rotunda. In March of 2006, Cox Communications sponsored the choir in a special presentation on television to benefit the victims of Hurricane Katrina in New Orleans to critical acclaim. During the summer of 2006, the Choir traveled to Prague, Czech Republic, for two concerts with maestro Paul Freeman and the Czech National Symphony Orchestra. In November 2006, the ensemble participated in a concert celebrating the Bicentennial Celebration and Re-opening of the Basilica of the Assumption - the first cathedral in America! In March 2007, the Choir sang at the Kennedy Center for a Living Jazz Legends Concert where the Choir performed with legendary Jazz performers as Nancy Wilson, Billy Taylor, Regina Carter, Jon Faddis, and T.S. Monk!

In August 2007, at the invitation of US Ambassador Bridgewater, the choir traveled to Ghana to help that country celebrate its 50th year of Independence. Also, in 2007, the choir was the recipient of a Mid-Atlantic Arts Foundation grant, which helps underwrite performances around the Mid-Atlantic Region. Under the auspice of this grant, the choir performed throughout the region with performances at The Strand Performing Arts Center in Harrisburg, PA, Strathmore Hall in Rockville, MD, and the several area colleges including Juniata College, Delaware State, Frostburg State, Hood College, Harford Community College, and University of Virgin Islands to mention a few.

In April 2008, the Morgan State University Choir sang at Carnegie Hall performing Faure’s Requiem Mass with Bobby McFerrin and the Orchestra of St. Lukes. October, of the same year, the Morgan State University Choir returned to Carnegie Hall, this time with Marin Alsop and the Baltimore Symphony Orchestra. The BSO featured a seldom-performed piece - Leonard Bernstein’s Mass - to celebrate the 90th birthday of the composer. In this work, the critics proclaimed the choir as “brilliant, refined and spirited as ever” in their presentation. During the following year, the recording of Mass was released on Naxos records heralded by critics as the definitive recording of the work! As a result of this acclaim, the recording was nominated for a Grammy Award for Best Classical Album of 2009.

In 2009, the choir traveled to two international destinations. In June of 2009, the choir sang in Bogotá and Medellín, Colombia at the invitation of the US Ambassador to that country. In July, the choir traveled to South Africa to sing in an international Choral festival. One of the highlights of the tour was singing Happy Birthday to Nelson Mandela on his 90th birthday celebration on national South African television.

In May 2010, the choir received acclaim for their performance with the Baltimore Symphony Orchestra and Kathleen Battle on a program entitled the Underground Railroad. A week later, the choir was off to a ten-day, five-city tour of China. The highlight of the Chinese tour were two concerts at the Shanghai Expo – The World’s Fair– at the American Pavilion, again mesmerizing the audience with their eclectic program mixture from Beethoven to Michael Jackson.

In October 2010, the choir travelled to St. Petersburg, Russia to participate in a Conservatory-week Festival at the St. Petersburg Conservatory, one of only three U.S. universities to participate. In May of 2011, Maryland Public Television released a new DVD of the choir in high definition, simply entitled: Lift Every Heart. During the summer of 2011, the choir travelled to Italy, to including performances at the Vatican in Rome.

During 2011-2012 academic years, the choir had several prominent performances. In August, the choir sang for an event celebration the unveiling of the Martin Luther King Memorial in Washington, DC. On September 11, 2011, the choir sang for the unveiling of the Maryland State 911 Memorial in Baltimore’s Inner Harbor. In November of 2011, the choir sang with Marin Alsop and the Baltimore Symphony Orchestra in a concert at Carnegie Hall singing Honegger’s Joan of Arc at the Stake. In April of 2012, the choir premiered a symphony “Affirmations” by Williams Benfield with the acclaimed group Sweet Honey in the Rock and the National Symphony at the Kennedy Center. In the summer of 2012, the choir will travelled Brazil for a ten-day tour. Following Brazil excursion, the choir toured Jamaica, at the invitation of US Ambassador to Jamaica, Pamela Bridgewater, helping that country celebrate 50 years of independence during the 4th of July holiday.

In May of 2013, the choir performed Carl Orff’s Carmina Burana with the Baltimore Symphony Orchestra. In the summer of 2013, the choir traveled to their farthest destination in Australia to share their music! During the summer of 2014, the Morgan State University choir travelled to five different countries! During their Middle East Tour, they travelled to Qatar, Oman, and United Arab Emirates with performances in Abu Dhabi and Dubai. During their Eastern European tour in 2014, the choir travelled to Belarus (the last dictatorship in Europe) and the beautiful country of Montenegro (formerly Yugoslavia).

On September 13, 2014, the choir sang for a national ceremony celebrating the two-hundredth anniversary of our National Anthem at Fort McHenry where Vice-President Joseph Biden gave remarks. The finale of this presentation was a performance with Jordan Sparks and United State Marine Band. In April 2015, at the request of First Lady Michelle Obama, the choir sang at the White House for a nationally televised concert in the East Room of the White House. During this concert, the choir accompanied Gospel music artists Aretha Franklin, Shirley Caesar, and Tamela Mann.
During the 2015-2016 academic year, the choir Morgan choir performed a world-premier with the Philadelphia Orchestra performing Hannibal Lokumbe’s One Land, One River, One People. In December the choir performed their annual Christmas concert on the stage of the Meyerhoff with the Baltimore Symphony Orchestra. In April 2016, the choir performed a semi-staged performance of Porgy and Bess with the Baltimore Symphony Orchestra to rave reviews. In February 2017, the choir performed All Rise with Wynton Marsalis and the Jazz orchestra at Lincoln Center. The Strathmore performances received great acclaim. In 2016, the choir toured the country of Cuba, where they had concerts in Cienfuegos, Santa Clara, and Havana! Last summer -2017, the choir toured Spain and Portugal!

Most recently, the Morgan State University choir sang for the Homegoing service of Dick Gregory in Washington, DC which was aired live on the TVOne cable station and aired around the country. On December 1st of this year, the choir will perform the Sacred Concerts of Duke Ellington with the Smithsonian Jazz Orchestra at the Nation Museum of Natural History.

The Morgan State University Choir has shared its musical gifts on many grand stages all over the world – with numerous dignitaries and celebrated performers – making them cultural ambassadors for Morgan State University, the City of Baltimore, the State of Maryland and the United States. Please visit www.msuchoir.org for additional information. 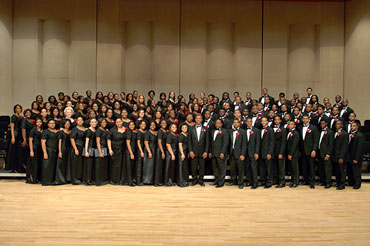