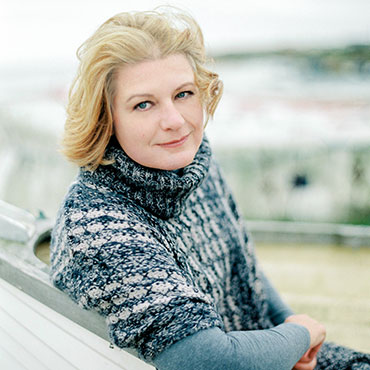 English mezzo-soprano Diana Moore is being lauded on both sides of the Atlantic for her “emotional depth” (The Guardian), “thrilling” technical bravura (Gramophone), and “rich, evocative sound” (San Francisco Chronicle). She enjoys a varied and international career of opera, oratorio, and concert performances and is a popular soloist at many major music festivals.

Ms. Moore’s tall and graceful stature has made her the ideal trouser-role performer. With conductor Nicholas McGegan and Philharmonia Baroque Orchestra, Moore performed the role of “Medoro” in Handel’s Orlando in an acclaimed American tour at the Ravinia Festival, Lincoln Center’s Alice Tully Hall, and Tanglewood Festival. The New York Times praised her “smooth toned” and “compassionate” performance while the Chicago Classical Review raved that she “made a delightfully shameless seducer in the trouser role of Medoro.” She has also performed the role at Göttingen, Sweden’s Drottningholm Court Theatre, with the English Concert and in San Francisco.

Other Handel roles include the title role in Rinaldo at Göttingen International Handel Festival, VlaamseOper, the National Theatre in Prague, and Versailles; Sesto in Giulio Cesare (Göttingen); and Armindo in Partenope with the Early Opera Company. The London Times commented that, “As Partenope’s true love, Diana Moore briefly fooled me into believing that she too was a man, so natural and elegant did she look in her suit... a perfectly lovely performance.”

Ms. Moore’s 17/18 season includes the title role in Handel’s oratorio The Choice of Hercules at the Göttingen International Handel Festival, and features return performances with the Baltimore Symphony (Mozart’s Requiem conducted by Marin Alsop) and Philharmonia Baroque Orchestra (Handel’s Messiah and the title role in Joseph and His Brethren with conductor Nicholas McGegan).

As a recording artist, Moore is a soloist on the premiere recording of Vivaldi’s La Gloria di Primavera released in 2016 with Philharmonia Baroque Orchestra which was selected as an “Editor’s Choice” recording in Gramophone. She has also recorded Mozart’s Requiem with Winchester College and the London Mozart Players on Convivium Records, released in Summer 2017 and Handel’s Messiah with Baltimore Symphony Orchestra for Naxos, to be released later this year.

Other engagements of note include performances with conductor Nicholas McGegan of Vivaldi’s Juditha Triumphans  (Holofernes) with the Philharmona Baroque Orchestra and Beethoven’s Ninth Symphony along with selections from Mahler’s Des Knabun Wunderhorn with Royal Northern Sinfonia; Elgar’s The Dream of Gerontius at Royal Albert Hall and Winchester, Ely, Gloucester, and York Minster Cathedrals; Bach’s Mass in B Minor and St. Matthew Passion, Handel’s La Resurrezione, Mendelssohn’s Paulus, and an all-Vivaldi program with The King’s Consort; St. Matthew Passion with Trevor Pinnock and the English Consort; a tour of Haydn masses in Switzerland with John Eliot Gardiner; Beethoven’s Mass in C with the Salzburg Camerata and Berlioz’s Les nuits d'été with the Northern Sinfonia, both under Sir Roger Norrington; and a performance of Mahler’s Das Lied von der Erde. She has performed Messiah with The English Concert/Harry Bicket, the Indianapolis Symphony Orchestra under Patrick Dupré Quigley, and the National Arts Centre Orchestra with Paul Goodwin conducting. Her recording of Handel's Parnasso in Festa with King’s Consort and conductor Matthew Halls was the winner of the Stanley Sadie Handel Recording Prize.

Ms. Moore's charismatic vocal quality and training place her firmly within the fine heritage of English mezzo-sopranos. She is committed to celebrating the music and musicians of her homeland and has built a reputation as a leading exponent of English song. In 2007, she devised Kathleen Ferrier — Her Life, Letters & Music, to honor that legendary English singer. The program has been endorsed by the Kathleen Ferrier Society, and a recent review called it “one of the most moving and captivating evenings I’ve spent.”

Born in Lowestoft, Suffolk, Ms. Moore studied at the University of Birmingham and the Royal Academy of Music, London where she won numerous prizes and is now an Honorary Associate.