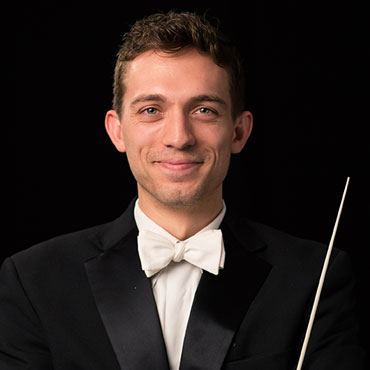 The Baltimore Choral Arts Society, now in its 53rd season, is one of Maryland's premier cultural institutions. The Symphonic Chorus, Full Chorus, Orchestra, and Chamber Chorus perform throughout the mid-Atlantic region, as well as in Washington, D.C., New York and in Europe.

Conductor and composer Anthony Blake Clark is one of the most exciting and fresh young voices in classical music today. He has conducted ensembles in the US and Europe and his compositions have been heard all across the state of Texas, the American East Coast, the UK and the Czech Republic. He also holds the position of Director of Choral Activities in The George Washington University’s Corcoran School of Art and Design in downtown DC where he conducts the University Singers and the GWU Chamber Singers. Clark has helped prepare choruses for esteemed maestros such as Sir John Eliot Gardiner, Simon Halsey CBE and Gijs Leenaars, for performances with renowned ensembles such as the Berliner Philharmoniker and Rundfunk Chor Berlin.

Clark’s first major conducting activity began while still an undergraduate; at age 21 he co-founded The Texas Baroque Ensemble and conducted the group’s premiere performance of Mozart’s Requiem in San Antonio, Texas. Conducting engagements with Texas Baroque have included performances of Mozart’s Requiem, a French instrumental programme, a 4-city tour of Handel’s Messiah, as well as their most recent concert featuring works by Bach, Albinoni, and Monteverdi.

Recent professional activity has included assistant conducting for the Rundfunk Chor Berlin’s performance of “Oedipus Rex” by Stravinsky with the Berliner Philharmoniker under the baton of Sir John Eliot Gardiner. Clark was recently one of many conductors in the 1,000-voice piece the public domain by David Lang at the Lincoln Center in New York City, working under his mentor Simon Halsey. Clark is a frequent guest clinician and has been engaged by institutions such as Historic Christ Church Alexandria, the Deer Creek Chorale, local high schools, and recently made his debut with the Symphony Orchestra of Northern Virginia in a performance of Beethoven’s “Choral Fantasy” and a world premiere by Brian Wilbur Grundstrom.

Anthony Blake Clark moved to the Baltimore/Washington area to become Director of Music and Worship Arts at Chevy Chase United Methodist Church where he regularly led the Sanctuary Choir in performances of sacred masterworks and also revived the Soundings Concert Series, which brought renowned soloists and ensembles to the prime DC area venue for free public performances. Clark was also Artistic Director of St. Maries Musica, the premiere choral ensemble of Southern Maryland and previously served as Ensemble Director to the Richmond Women’s Chorus.

Blake completed a Master’s Degree under 3-time Grammy Award winner Simon Halsey (CBE and recipient of the Queen’s Medal for Music), at the University of Birmingham. While completing his studies in England, Clark had the great privilege of being a member of the internationally acclaimed City of Birmingham Symphony Chorus where he sang under world-renowned conductors such as Sir Simon Rattle, Andris Nelsons, Edward Gardiner, and Gianandrea Noseda. Clark also was employed by the CBSO to conduct the Arts Champion Community Choir as part of an initiative to create a CBSO sponsored community chorus structure across the entire city of Birmingham. While in England, Clark also conducted in the London Symphony Chorus “Come and Sing Day”, took rehearsals for the CBSO Chorus, and conducted the Barber Festival Sinfonia in their annual summer festival performance. As Professor Halsey’s graduate student, Clark was partially responsible for choral ensembles on campus and conducted the University Camerata, as well as assisted with the University Singers, the University Women’s Choir and the University Chorus.

A Texas native, Anthony Blake Clark attended Baylor University School of Music to study composition under Dr. Scott McAllister and began studying conducting with Dr. Lynne Gackle. He was also a member of the prestigious Baylor A Cappella Choir. In his final year at Baylor he was a student conductor for the Baylor Chamber Singers, whom he conducted in several concerts.

Clark also has had extensive training in festivals and workshops under master tutors; most recently he was granted a Fellowship to conduct in the Yale School of Music’s Norfolk Music Festival led by world-renowned conductor Simon Carrington, whom he also worked with in the Sarteano Choral Workshop. He has also participated in an orchestral conducting program in London culminating in a performance of Mozart’s Symphony 41 in C Major with the London Classical Soloists.

As an active composer, Blake’s music has been performed in the Washington DC area and the Dvorak National Museum Concert Hall in Prague, Czech Republic. Most recently his music has been premiered by the National Philharmonic Chamber Singers in Chevy Chase, Maryland. Clark was invited to participate in the 2012 Czech-American Summer Music Institute where he studied with celebrated composer Ladislav Kubik. Clark’s chamber piece Incidental Music on the Pied Piper of Hamelin won the Robert Browning Bicentennial Composition Contest and was performed in a concert series on Baylor University’s campus.