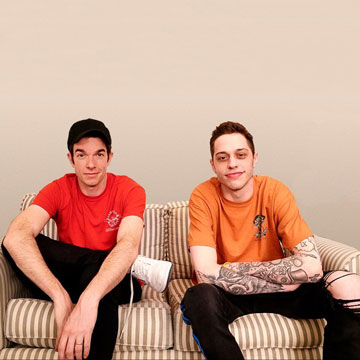 PLEASE NOTE THIS EVENT IS SOLD OUT

Please note: The BSO is not performing on this program. Tickets to this performance can only be purchased through Ticketmaster.com.

Comedians John Mulaney and Pete Davidson are coming to the Joseph Meyerhoff Symphony Hall! Brought together by SNL, the famous duo have been selling out theaters up and down the east coast. Now they’ll be bringing their unique styles of stand-up comedy to the city of Baltimore.

John Mulaney is an Emmy Award winning writer and comedian. He recently toured the United States with, Kid Gorgeous, which was also released as a Netflix Special in May 2018 and won the Emmy for Outstanding Writing in a Variety Special. Additionally, he has hosted SNL twice, in April 2018 and March 2019. Previously, John starred in the Broadway hit, Oh, Hello on Broadway alongside Nick Kroll. He can most recently be heard in Spider-Man: Into the Spider-Verse which won the Golden Globe for best Animated Feature Film. In 2015 Mulaney released his 3rd hour stand up special a Netflix Original titled The Comeback Kid which the AV Club called “his best hour of his career.” He began his career in New York’s East Village and has since toured around the world.

Davidson, 25, is the youngest member of the current SNL cast, as well as the first member to be born in the 1990s. Davidson shot his first one-hour stand up special for Comedy Central in 2016 and was named one of Forbes’ 2016 “30 Under 30.” He made headlines as one of the featured comedians on the 2015 Comedy Central “Roast of Justin Bieber.” Davidson can be seen in the Netflix comedy “Set It Up,” the independent film “Big Time Adolescence” and Paramount Players’ “What Men Want.” Most recently, he was in Netflix’s Mötley Crüe biopic “The Dirt.”