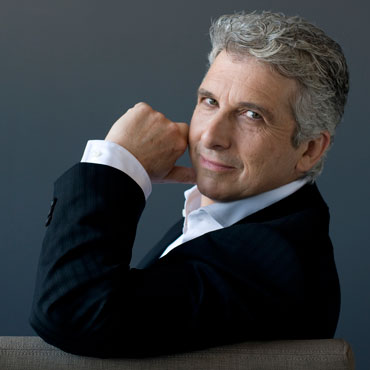 A dynamic presence in the conducting world, Peter Oundjian is renowned for his probing musicality, collaborative spirit and engaging personality.

2017-18 marks Oundjian’s fourteenth and final season as Music Director of the Toronto Symphony Orchestra (TSO). His appointment in 2004 reinvigorated the Orchestra with recordings, tours, and acclaimed innovative programming, as well as extensive audience growth, significantly strengthening the ensemble’s presence in the world. In 2014, he led the TSO on a tour of Europe, which included a sold-out performance at Amsterdam’s Concertgebouw and the first performance of a North American orchestra at Reykjavík’s Harpa Hall. Last season, Oundjian led the TSO on a major tour of Israel and Europe.

Oundjian was appointed Music Director of the Royal Scottish National Orchestra (RSNO) in 2012. Under his baton, the orchestra has enjoyed several successful tours including one to China, and has continued its relationship with Chandos Records. Oundjian concludes his six-year tenure with the RSNO at the end of the 17-18 season.

Oundjian was recently named Artistic Advisor for the Colorado Music Festival, and this season he returns to the Baltimore, Atlanta, and NHK Symphonies and the Los Angeles Chamber Orchestra.

Few conductors bring such musicianship and engagement to the world’s great podiums—from Berlin, Amsterdam, and Tel Aviv, to New York, Chicago and Sydney. He has also appeared at some of the great annual gatherings of music and music-lovers: from the BBC Proms and the Prague Spring Festival, to the Edinburgh Festival and The Philadelphia Orchestra’s Mozart Festival, where he was Artistic Director from 2003 to 2005.

Oundjian was Principal Guest Conductor of the Detroit Symphony Orchestra from 2006 to 2010 and Artistic Director of the Caramoor International Music Festival in New York between 1997 and 2007. Since 1981, he has been a visiting professor at the Yale School of Music, and was awarded the university’s Sanford Medal for distinguished service to music in 2013.