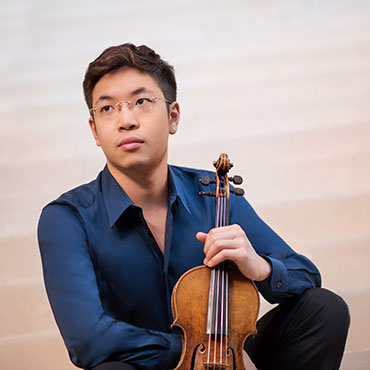 His recent and forthcoming engagements include debuts with the Mariinsky Orchestra with Valery Gergiev (St. Petersburg's White Nights Festival), Berliner Symphoniker with Lior Shambadal (Philharmonie Berlin debut), Detroit Symphony with Leonard Slatkin, Houston Symphony with Andres Orozco-Estrada, Orchestra of St. Luke's with Carlos Miguel Prieto, Seoul Philharmonic with Markus Stenz, Taipei Symphony with Gilbert Varga (both in Taipei and on a U.S. tour) and the National Taiwan Symphony Orchestra with the late Christopher Hogwood. This season, he will also be making his Chicago orchestral debut at the Grant Park Music Festival, as well as performances with the Louisiana Philharmonic, Knoxville Symphony, North Carolina Symphony, New Mexico Philharmonic, Brevard Symphony, Windsor Symphony and the Hilton Head Symphony.

During the 2017-18 season, Mr. Huang makes recital debut at the Lucerne Festival in Switzerland and embarks on a recital tour in La Jolla, Chicago, Toronto, Palm Desert, Taiwan (Taipei, Hsinchiu, Tainan), New York and culminating at the Kennedy Center in Washington D.C.  In addition, Mr. Huang continues his association with the Chamber Music Society of Lincoln Center for three separate tours in the U.S., Europe and the Far East and return to Camerata Pacifica as their Principal Artist.

During 2014-15 season, he debuted on Lincoln Center's "Great Performers" series and stepped in for Midori with Leonard Slatkin and the Detroit Symphony to critical acclaim. He has also made debuts at the Wigmore Hall, Seoul Arts Center and the Louvre in Paris.

His first solo CD, Intimate Inspiration, is a collection of favorite virtuoso and romantic encore pieces released on the CHIMEI label. In association with Camerata Pacifica, he recorded "Four Songs of Solitude" for solo violin on their album of John Harbison works. The album was released on the Harmonia Mundi label in fall 2014.

Born in Taiwan, Mr. Huang began violin lessons at the age of seven. He is a proud recipient of the inaugural Kovner Fellowship at The Juilliard School, where he earned his Bachelor’s and Master’s degrees under Hyo Kang and I-Hao Lee. He plays on the 1742 ex-Wieniawski Guarneri del Gesù on loan through the generous efforts of the Stradivari Society of Chicago. His website is www.paulhuangviolin.com.​