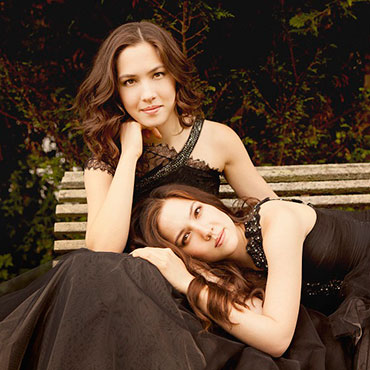 Christina and Michelle Naughton have been hailed by the San Francisco Examiner for their “stellar musicianship, technical mastery, and awe-inspiring artistry”. The Naughtons made their European debut at Herkulesaal in Munich, where the Süddeutsche Zeitung proclaimed them “an outstanding piano duo”. They made their Asian debut with the Hong Kong Philharmonic, where the Sing Tao Daily said of their performance “Joining two hearts and four hands at two grand pianos, the Naughton sisters created an electrifying and moving musical performance.” An appearance with the Philadelphia Orchestra led the Philadelphia Inquirer to characterize their playing as “paired to perfection,” while the Saarbrücker Zeitung exclaimed “this double star could soon prove to be a supernova.” They have captivated audiences throughout the globe with the unity created by their mystical musical communication, as featured by the Wall Street Journal in their own words “There are times I forget we are two people playing together.”

The Naughtons open their 2017-2018 season with recital appearances at the La Jolla Music Society and the Ravinia Festival. Additional engagements include the duo’s Lincoln Center debut as well as appearances at the Gilmore Festival, Rockefeller Evening Concerts, Purdue Convocations, Portland Piano International, Society of the Four Arts, Sharon Lynn Wilson Center, Virginia Arts Festival and the National Gallery. Orchestral season highlights include performances with the Detroit, St. Louis, San Diego, Midland and Puerto Rico Symphonies. The duo will also be seen in recital and orchestral engagements throughout New Zealand, Brazil, Belgium and Spain.

The Naughtons opened their 2016-2017 season with their debut at The Royal Concertgebouw playing Mozart’s Double Piano Concerto with the Netherlands Philharmonic Orchestra. Other season highlights included performances across the United States with the Milwaukee, Madison and San Antonio Symphonies in addition to recital engagements at the Philharmonic Society of Orange County, the Grand Tetons Festival, the Gardner Museum, Big Arts in Sanibel Island and the Smithsonian American Art Museum in Washington, DC. The duo was seen in recital and orchestral engagements throughout Germany, Spain and Portugal including an appearance at the Ruhr Piano Festival.

In February of 2016 the Naughtons released their debut record on the Warner Classics label titled “Visions,” featuring the music of Messiaen, Bach and Adams. The album received much critical acclaim with The Washington Post hailing them as one of the “greatest piano duos of our time.”

Highlights from the Naughtons’ 2015-2016 season included performances presented by the New World Symphony, Los Angeles Philharmonic at Walt Disney Hall, at the Classic Festival and the Bonlieu Scène Nationale in Annecy, France, at the Concertgebouw in Amsterdam, and at the Grand Teton Music Festival. In addition to recital tours of Latin America and China, the sisters appeared with the St. Petersburg Philharmonic, Orquesta Sinfonica do Estado Sao Paulo, the Netherlands Philharmonic, l’Orchestre Philharmonique de Strasbourg, the Frankfurter Opern- and Museumsorchester and the Atlanta Symphony.

The Naughtons recorded their first album in the Sendesaal in Bremen Germany; which was released worldwide in Fall 2012 by label ORFEO.  The album has been praised by Der Spiegel Magazine for “stand(ing) out with unique harmony, and sing(ing) out with stylistic confidence’, and described by ClassicsToday as a “Dynamic Duo Debut”. Their performances have been broadcast on American Public Media’s Performance Today, Sirius XM Satellite Radio, New York’s WQXR, Chicago’s WFMT, Philadelphia’s WHYY, Boston’s WQED, Atlanta’s WABE, Hong Kong’s RTHK, Latvia’s Latvijas Radio 3, Netherland’s Radio 4 Concerthuis; and Germany’s Bayerischen Rudfunks, Nordwest-RadioBremen, WDR and NDR Radio.

Born in Princeton, New Jersey to parents of European and Chinese descent; Christina and Michelle are graduates of Juilliard School and the Curtis Institute of Music, where they were each awarded the Festorazzi Prize. They are Steinway Artists and currently reside in New York City.