MENDELSSOHN Sinfonia No. 7 for Strings in D minor

Sinfonia No. 7 for Strings in D minor 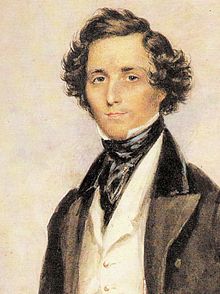 Felix Mendelssohn was truly a golden child, blessed with brains and prodigious talent, and a near-ideal environment in which to cultivate them. His grandfather, Moses Mendelssohn, had risen from poverty to become an esteemed Enlightenment philosopher; his father, Abraham, was one of Germany's leading bankers and had made the family fortune. Both Felix's parents were highly educated people, determined that their offspring would realize their full potential.

At age ten, Felix began studying composition with Carl Friedrich Zelter, a Berlin composer who drilled him thoroughly in the Baroque counterpoint of Bach and the Classical style of Haydn and Mozart. Rapidly, the youngster blossomed into an even more accomplished composer than Mozart had been at that age. A series of 13 symphonies for string orchestra, written between the ages of 12 and 15 for Zelter, shows Felix’s steady development to mastery.

We rarely get a chance to hear these delightful works. The Seventh String Symphony in D minor was composed sometime between late 1821 and early 1822 when Mendelssohn was only 12 or 13. He was still a child in appearance, not yet very tall and with long, curly dark hair reaching to his shoulders. But he was already creating music with the technical skill and assurance of an adult, and he knew how to make string instruments sing.

The vigorous first movement springs from a wild unison flurry, followed by a soft, plaintive response in violins and violas. All this energy is eased by the lyrical second theme, in which the two violin sections float against each other in beautiful slow suspensions over a pattering accompaniment.

Mendelssohn gives the lovely, lilting second movement the charming marking amorevole — “loving.” It begins as a melodious duet between the two violin sections with the other instruments gradually creeping in. Though the key is D Major, the young composer also makes strong use of the minor mode and other wonderful harmonic shadings.

Marked Menuetto, the third movement is really a Beethovenian scherzo with a hint of the demonic inspired by its D minor key. With its spooky rising motive, the Trio section is even more striking; Mendelssohn gets so caught up in its contrapuntal and harmonic possibilities, he never gets back to the scherzo.

The exuberant display of fugal counterpoint is the focus of the astonishing finale. Mendelssohn must have loved and carefully studied Mozart's “Jupiter” Symphony, for he patterns it closely on that symphony's brilliant display of fugal invention. Its dashing, effervescent principal theme is pure Mendelssohn. But it’s with the second theme, introduced by the violas, that the young composer gets to show off his fugal mastery, which also reappears in the development section. Mozart was a mature 32 when he created the contrapuntal genius of the “Jupiter” finale; at 13, he would not have been capable of pulling off what the pre-adolescent Mendelssohn achieves here.