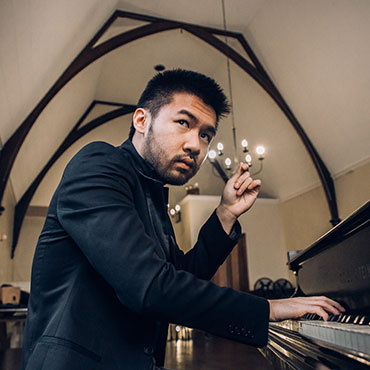 Conrad Tao has appeared worldwide as a pianist and composer, and has been dubbed a musician of “probing intellect and open-hearted vision” by the New York Times, a “thoughtful and mature composer” by NPR, and “ferociously talented” by TimeOut New York. In June of 2011, the White House Commission on Presidential Scholars and the Department of Education named Tao a Presidential Scholar in the Arts, and the National Foundation for Advancement in the Arts awarded him a YoungArts gold medal in music. Later that year, Tao was named a Gilmore Young Artist, an honor awarded every two years highlighting the most promising American pianists of the new generation. In May of 2012, he was awarded the prestigious Avery Fisher Career Grant.

Tao’s 2017-18 season includes his Lincoln Center debut with a solo recital including a work by American composer Jason Eckhardt, a residency with the Utah Symphony performing both Bernstein’s Age of Anxietyand Prokofiev’s Piano Concerto No. 2, and debut engagements with the Atlanta Symphony, New Jersey Symphony and Seattle Symphony. Tao will both perform in his own recital and have a new work composed for Paul Huang and Orion Weiss performed at Washington Performing Arts Society, and opens the ProMusica Chamber Orchestra’s season with the world premiere of a new commissioned work, Over. Additionally, a new multimedia work, Ceremony, developed with vocalist Charmaine Lee, will receive its premiere at Brooklyn’s Roulette.

Outside of the U.S., Tao has been re-invited to perform with the Berner Symphoniker and Mario Venzago in Switzerland, and will also make his debut with the Finnish Radio Symphony Orchestra and James Gaffigan. He will also return to Italy with the Orchestra Verdi Milano and Vladimir Fedoseev, and Malaysia with the Malaysian Philharmonic and Eiji Oue.

This busy season comes after recent performances with the Philadelphia Orchestra and Stéphane Denève (Conrad’s SPAC debut), Chicago’s Grant Park Music Festival with Carlos Kalmar, and premieres of his commissions by the Pacific Symphony, the Atlantic Classical Orchestra, and Jaap van Zweden and the Hong Kong Philharmonic. Conrad also had an on-stage performance role in the world premiere of David Lang’s the loser at BAM and an acclaimed recital in Unison Media’s Crypt Sessions series.

In June of 2013, Tao kicked off the inaugural UNPLAY Festival at the powerHouse Arena in Brooklyn, which he curated and produced. The festival, designated a “critics’ pick” by Time Out New York and hailed by the New York Times for its “clever organization” and “endlessly engaging” performances, featured Conrad with guest artists performing a wide variety of new works. Across three nights encompassing electroacoustic music, performance art, youth ensembles, and much more, UNPLAY explored the fleeting ephemera of the Internet, the possibility of a 21st-century canon, and music’s role in social activism and critique. That month, Tao, a Warner Classics recording artist, also released Voyages, his first full-length for the label, declared a “spiky debut” by the New Yorker’s Alex Ross. Of the album, NPR wrote: “Tao proves himself to be a musician of deep intellectual and emotional means – as the thoughtful programming on this album…proclaims.” His next album, Pictures, which slots works by David Lang, Toru Takemitsu, Elliott Carter and Tao himself alongside Mussorgsky’s familiar and beloved Pictures at an Exhibition, was hailed by The New York Times as “a fascinating album [by] a thoughtful artist and dynamic performer…played with enormous imagination, color and command.”

Tao’s career as composer has garnered an eight consecutive ASCAP Morton Gould Young Composer Awards and the Carlos Surinach Prize from BMI. In the 2013-14 season, while serving as the Dallas Symphony Orchestra’s artist-in-residence, Tao premiered his orchestral composition, The world is very different now. Commissioned in observance of the 50th anniversary of the assassination of President John F. Kennedy, the work was described by the New York Times as “shapely and powerful.” Most recently, the Chamber Orchestra of Philadelphia commissioned a new work for piano, orchestra and electronics, An Adjustment, which received its premiere in September 2015 with Tao at the piano. The Philadelphia Inquirer declared the piece abundant in “compositional magic,” a “most imaginative [integration of] spiritual post-Romanticism and ‘90s club music.”

Tao was born in Urbana, Illinois, in 1994. He has studied piano with Emilio del Rosario in Chicago and Yoheved Kaplinsky in New York, and composition with Christopher Theofanidis.