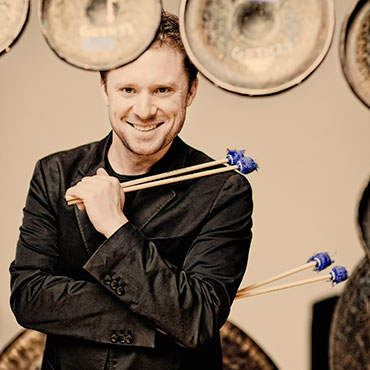 Hailed as “the world’s finest and most daring percussionist” (Spectator), Colin Currie is a solo and chamber artist at the peak of his powers. Championing new music at the highest level, Currie is the soloist of choice for many of today’s foremost composers and he performs regularly with the world’s leading orchestras and conductors.

Currie is Artist in Association at London’s Southbank Centre, where he was the focus of a major percussion festival Metal Wood Skin in 2014 and continues to perform there every season. Currie is also Artist in Residence with Oregon Symphony Orchestra 2015/16 -2017/18. The three season residency includes annual performances with Oregon Symphony Orchestra, extensive education and outreach work, and this season sees the world premiere of Andy Akiho’s Percussion Concerto in April 2018, conducted by Carlos Kalmar.

Currie’s 2017/18 season is marked by a number of other premieres including a new work for piano and percussion by Sir Harrison Birtwistle with Nicolas Hodges at the Library of Congress and London’s Southbank Centre. Currie will also premiere new works by Brett Dean and Joe Duddell with Håkan Hardenberger at Malmo Chamber Festival this September and Aldeburgh Music in November 2017, and a new work for percussion and electronics by Dave Maric with the Scottish Ensemble.

Other highlights of 2017/18 include the Scandinavian premiere of HK Gruber’s into the open… with the Royal Stockholm Philharmonic, conducted by HK Gruber, and a series of solo recitals including The Schubert Club, Budapest, Lawrence University and at Sir James MacMillan’s The Cumnock Tryst. Currie’s orchestral engagements include Houston Symphony, Antwerp Symphony, BBC Philharmonic, Scottish Chamber Orchestra, Het Gelders Orkest, National Youth Orchestra of Scotland and Brno Contemporary Orchestra.

Currie’s dynamic ensemble the Colin Currie Group was formed in 2006 to celebrate the music of Steve Reich and made its five-star debut at the BBC Proms. Since then, with Reich’s personal endorsement Currie and his ensemble have taken on the role of ambassadors of Drumming, which they have performed at many venues and festivals internationally. Highlights of the 2017/18 season include the release of the group’s debut recording of Drumming and performances at King’s Place and Saffron Hall.

Currie has recorded many concerto, recital and chamber works including most recently Elliott Carter’s Two Controversies and a Conversation with Pierre-Laurent Aimard and Oliver Knussen (Ondine) and Simon Holt’s a table of noises with The Hallé Orchestra/Collon (NMC). His recording of Rautavaara’s Incantations with the Helsinki Philharmonic/Storgårds (Ondine) was released to critical acclaim and won a 2012 Gramophone Award. Previous releases by Currie include MacMillan’s Veni, Veni, Emmanuel with the Netherlands Radio Chamber Philharmonic/MacMillan on Challenge Classics, Jennifer Higdon’s Percussion Concerto with the London Philharmonic/Alsop, which won a 2010 Grammy Award, and a recital disc Borrowed Time featuring music by Dave Maric (Onyx). Currie recently recorded Steve Reich’s Quartet with Colin Currie Group to be released by Nonesuch Records in the coming season.