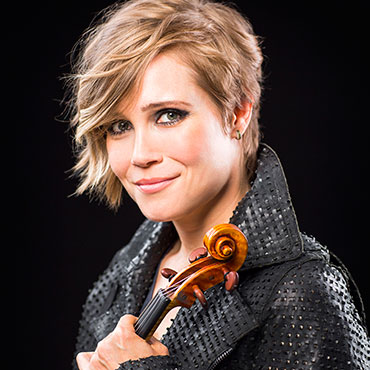 Leila Josefowicz’s passionate advocacy of contemporary music for the violin is reflected in her diverse programmes and enthusiasm to perform new works. She frequently collaborates with leading composers and works with orchestras and conductors at the highest level around the world. In 2008 she was awarded a prestigious MacArthur Fellowship, joining prominent scientists, writers and musicians who have made unique contributions to contemporary life.

Highlights of Josefowicz’s 2017/18 season include concerts with the Los Angeles Philharmonic, Concertgebouw Orchestra and Iceland, Boston, Lahti and Finnish Radio symphony orchestras, as well as Washington’s National Symphony Orchestra. Alongside pianist John Novacek, with whom Josefowicz has enjoyed a close collaboration since 1985, she performs recitals in Reykjavik, Leeds, Chicago, San Francisco, Santa Barbara and Halifax (Nova Scotia) and has appeared recently at world-renowned venues such as New York’s Zankel Hall and London’s Wigmore Hall, where she returns in autumn 2017.

Violin concertos have been written especially for Leila Josefowicz by composers including John Adams, Esa-Pekka Salonen, Colin Matthews and Steven Mackey. Scheherazade.2 (Dramatic Symphony for Violin and Orchestra) by Adams was given its world premiere by Josefowicz in 2015 with the New York Philharmonic. Luca Francesconi’s concerto Duende – The Dark Notes, also written for Josefowicz, was given its world premiere by her in 2014 with Swedish Radio Symphony Orchestra and Susanna Mälkki before being performed by Josefowicz, Mälkki and the BBC Symphony Orchestra at the BBC Proms in 2015.

Josefowicz has released several recordings, notably for Deutsche Grammophon, Philips/Universal and Warner Classics and was featured on Touch Press’ acclaimed iPad app, The Orchestra. Her latest recording, featuring Scheherazade.2 with the St Louis Symphony conducted by David Robertson, was released in 2016 and nominated for a Grammy Award. Josefowicz’s recording of Esa-Pekka Salonen’s Violin Concerto with the Finnish Radio Symphony Orchestra conducted by the composer, was also nominated for a Grammy Award in 2014.