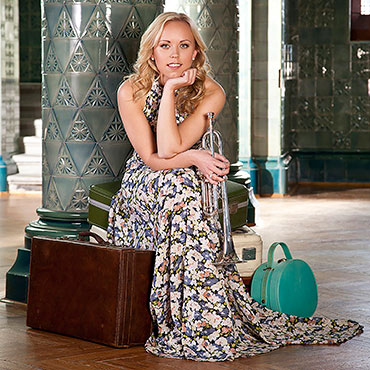 Following her 2013 BBC Proms debut performance of Matthias Pintscher's Chute d’étoiles with the BBC Scottish Symphony, Norwegian trumpeter Tine Thing Helseth has rapidly established herself as one of the foremost trumpet soloists of our time, garnering critical acclaim for her soulful, lyrical sound and collaborative approach to music-making.

Recent and forthcoming highlights include a concert tour to Germany and Austria with Andrew Manze and the NDR Radiophilharmonie Hanover; concerts with Vasily Petrenko and the Rundfunk-Symphonieorchester Berlin, Lahav Shani and the Royal Liverpool Philharmonic, and Kirill Karabits and the Bournemouth Symphony; a three-week artist residency with the Bodenseefestival at Lake Constance; and the continuation of a series of "Up Close" club-style performances, curated for the Manchester Camerata. The 2016/2017 season also marks Tine's long-awaited debut on natural trumpet, which she will take up with the celebrated German period ensemble the Akademie für Alte Musik, in a programme featuring works by Telemann, Vivaldi and Handel.

Tine also continues embarking on regular tours with her ten-piece, all-female brass ensemble tenThing. An idea that started in 2007 as a fun and exciting project to pursue with her closest musical friends, the group have gone on to play to numerous European audiences (past festival appearances include Schleswig-Holstein, Beethoven Bonn, Gstaad, MDR Musiksommer, Mecklenburg-Vorpommern, Rheingau, Merano, Thüringer Bachwochen, and Bremen). tenThing make their North American and Paris debuts in 2017, with concerts in New York, Philadelphia, Minneapolis, Washington D.C., and at the Wolftrap, St Denis, Gstaad and I Suoni delle Dolomiti festivals.

Tine has been the recipient of various awards for her work in classical music, including “Newcomer of the Year” at the 2013 Echo Klassik Awards, the 2009 Borletti-Buitoni Trust Fellowship, and second prize in the 2006 Eurovision Young Musicians Competition, to which Tine returned to serve as juror for the 2016 competition. In 2007, Tine had the rare honour of being the first ever classical artist to be nominated for a Norwegian Grammy® Award.

Tine resides in Oslo and maintains an active role in her community as a regular TV and radio presenter, and also teaches trumpet at the Norwegian Academy of Music. In June 2013, Tine launched her own bi-annual festival, Tine@Munch, in celebration of the 150th anniversary of the birth of Edvard Munch. The three days of curated events and performances at Oslo’s Edvard Munch Museum featured a variety of performances and guest artists such as Leif Ove Andsnes, Nicola Benedetti, and Truls Mork.