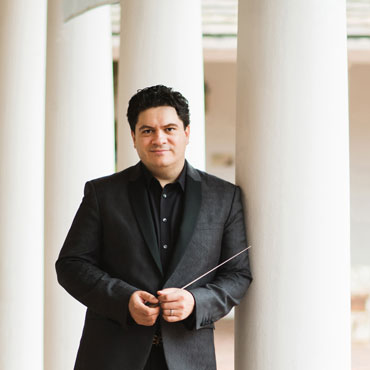 Newly appointed Music Director and Conductor of the Cabrillo Festival of Contemporary Music, Cristian Măcelaru has established himself as one of the fast-rising stars of the conducting world. With every concert he displays an exciting and highly regarded presence, thoughtful interpretations and energetic conviction on the podium. He launches his inaugural season at Cabrillo in August 2017 with premiere-filled programs of new works and fresh re-orchestrations by an esteemed group of composers. Among the 2017 season’s highlights are seven world premieres, 11 composers-in-residence, a stunning roster of international guest artists, and two special tributes – one to commemorate Lou Harrison’s centenary and another honoring John Adams’ 70th birthday.

He recently completed his tenure with the Philadelphia Orchestra as Conductor-in-Residence, a title he held for three seasons until August 2017. Prior to that, he was their Associate Conductor for two seasons and previously Assistant Conductor for one season from September 2011. He made his Philadelphia Orchestra subscription debut in April 2013 and continues a close relationship with the orchestra in leading them on annual subscription programs and other special concerts.

Cristian Măcelaru made his Carnegie Hall debut in February 2015 on a program with the Danish National Symphony Orchestra and Anne-Sophie Mutter. A keen opera conductor, in June 2015 he led the Cincinnati Opera in highly acclaimed performances of Il Trovatore. In 2010, he made his operatic debut with the Houston Grand Opera in Madama Butterfly and conducted the U.S. premiere of Colin Matthews’s Turning Point with the Tanglewood Music Center Orchestra as part of the Tanglewood Contemporary Music Festival. In 2019, he returns to the Houston Grand Opera on a Kasper Holten production of Don Giovanni.

Măcelaru came to public attention in February 2012 when he conducted the Chicago Symphony Orchestra as a replacement for Pierre Boulez in performances met with critical acclaim. Winner of the 2014 Solti Conducting Award, he previously received the Sir Georg Solti Emerging Conductor Award in 2012, a prestigious honor only awarded once before in the Foundation’s history. Măcelaru has participated in the conducting programs of the Tanglewood Music Center and the Aspen Music Festival, studying under David Zinman, Rafael Frühbeck de Burgos, Oliver Knussen and Stefan Asbury. His main studies were with Larry Rachleff at Rice University, where he received master’s degrees in conducting and violin performance. He completed undergraduate studies in violin performance at the University of Miami. An accomplished violinist from an early age, Măcelaru was the youngest concertmaster in the history of the Miami Symphony Orchestra and made his Carnegie Hall debut with that orchestra at the age of nineteen. He also played in the first violin section of the Houston Symphony for two seasons.

Măcelaru formerly held the position of Resident Conductor at Rice University’s Shepherd School of Music, where he was Music Director of the Campanile Orchestra, Assistant Conductor to Larry Rachleff and Conductor for the Opera Department. A proponent of music education, he has served as a conductor with the Houston Youth Symphony, where he also conceptualized and created a successful chamber music program. As Founder and Artistic Director of the Crisalis Music Project, Mr. Măcelaru spearheaded a program in which young musicians perform in a variety of settings, side-by-side with established artists. Their groundbreaking inaugural season produced and presented concerts featuring chamber ensembles, a chamber orchestra, a tango operetta, and collaborations with dancer Susana Collins, which resulted in a choreographed performance of Vivaldi/Piazzolla’s Eight Seasons.

Cristian Măcelaru resides in Philadelphia with his wife Cheryl and children Beniamin and Maria.