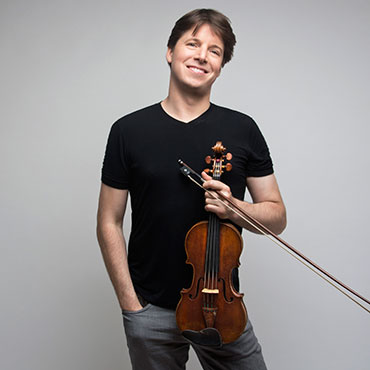 With a career spanning more than 30 years as a soloist, chamber musician, recording artist and conductor, Joshua Bell is one of the most celebrated violinists of his era. An exclusive Sony Classical artist, Bell has recorded more than 40 CDs garnering Grammy, Mercury, Gramophone and Echo Klassik awards and is the recipient of the Avery Fisher Prize. Named the Music Director of the Academy of St Martin in the Fields in 2011, he is the only person to hold this post since Sir Neville Marriner formed the orchestra in 1958.

In Summer 2017, Bell leads the Academy of St. Martin in the Fields in residency appearances at the Edinburgh Festival and the Bravo! Vail Festival. He performs as soloist at the BBC Proms in London with the Royal Philharmonic Orchestra and Charles Dutoit, Lincoln Center’s Mostly Mozart Festival, Tanglewood and the Hollywood Bowl. In the Fall, he joins the Los Angeles Chamber Orchestra and partakes in the New York Philharmonic’s celebration of Leonard Bernstein’s centennial, performing Bernstein’s Serenade led by Alan Gilbert. A nine-city North American recital tour with pianist Alessio Bax includes Chicago’s Symphony Center and Washington D.C.’s Strathmore Center. He makes appearances with the Vienna Symphony and the Monte Carlo Philharmonic and performs multiple concerts at London’s Wigmore Hall with the Academy of St. Martin in the Fields. In Spring 2018, Bell continues with the Academy in tours covering the United Kingdom, United States and Asia, with highlights in London, New York, San Francisco, Tokyo, Seoul, Beijing and Shanghai. With pianist Sam Haywood, he performs 10 recitals in Europe and America that take them to the Philharmonie de Paris, Zurich Tonhalle and beyond. On February 7, 2018, Bell reunites with longtime collaborator pianist Jeremy Denk for a recital broadcast live from Carnegie Hall. Further season highlights include the Philadelphia Orchestra conducted by Yannick Nézet-Séguin and Cristian Măcelaru, Danish National Symphony with Măcelaru, and an all-Beethoven play/direct program with the Orchestre National de Lyon.

Convinced of the value of music as a diplomatic and educational tool, Bell participated in President Obama’s Committee on the Arts and Humanities’ first cultural mission to Cuba. He is also involved in Turnaround Arts, another project implemented by the Committee and the John F. Kennedy Center for the Performing Arts. which provides arts education to low-performing elementary and middle schools. Bell has performed for three U.S. Presidents as well as the President of China and devoted himself to several charitable causes, most notably Education Through Music, which put instruments in the hands of thousands of children in America’s inner cities.

In 2013, Sony released Bell’s holiday CD, Musical Gifts from Joshua Bell and Friends, featuring collaborations with Chris Botti, Chick Corea, Gloria Estefan, Renée Fleming, Plácido Domingo, Alison Krauss and others. Other releases include French Impressions with pianist Jeremy Denk, featuring sonatas by Saint-Saëns, Ravel and Franck, At Home with Friends, Vivaldi's The Four Seasons with the Academy of St Martin in the Fields, The Tchaikovsky Concerto with the Berlin Philharmonic, as well as The Red Violin Concerto, The Essential Joshua Bell, Voice of the Violin, and Romance of the Violin which Billboard named the 2004 Classical CD of the Year, and Bell the Classical Artist of the Year.

Bell received critical acclaim for his concerto recordings of Sibelius and Goldmark, Beethoven and Mendelssohn, and the Grammy Award winning Nicholas Maw concerto. His Grammy-nominated Gershwin Fantasy premiered a new work for violin and orchestra based on themes from Porgy and Bess. Its success led to a Grammy-nominated Bernstein recording that included the premiere of the West Side Story Suite as well as the composer's Serenade. Bell appeared on the Grammy-nominated crossover recording Short Trip Home with composer and double bass virtuoso Edgar Meyer, as well as a recording with Meyer of the Bottesini Gran Duo Concertante. He collaborated with Wynton Marsalis on the Grammy-winning spoken word children's album Listen to the Storyteller and Béla Fleck’s Grammy Award winning recording, Perpetual Motion. Highlights of the Sony Classical film soundtracks on which he has performed include The Red Violin which won the Oscar for Best Original Score, the Classical Brit-nominated Ladies in Lavender, and the films, Iris and Defiance.

Seeking opportunities to increase violin repertoire, Bell has premiered new works by John Corigliano, Aaron Jay Kernis, Nicholas Maw, Edgar Meyer, Behzad Ranjbaran and Jay Greenberg. He also performs and has recorded his own cadenzas to most of the major violin concertos.

Perhaps the event that helped most to transform Bell’s reputation from “musician’s musician’ to household name was his incognito performance in a Washington, D.C. subway station in 2007. Ever adventurous, he had agreed to participate in a Washington Post story by Gene Weingarten which thoughtfully examined art and context. The story earned Weingarten a Pulitzer Prize and sparked an international firestorm of discussion. The conversation continues to this day, and inspired the 2013 children’s book The Man with the Violin by Kathy Stinson, illustrated by Dušan Petričić from Annick Press. Just published in 2017 by the same team is The Dance of the Violin which recalls the 12-year-old Bell making a mistake at the Stulberg International String competition and the unexpected outcome which transpired when he was given a second chance.

Bell has reached new audiences from collaborations with artists outside the classical arena and performances on television shows including his 2017 seventh Live from Lincoln Center special: Joshua Bell: Seasons of Cuba. Appearances on The Tonight Show, Tavis Smiley, Charlie Rose, and CBS Sunday Morning, Sesame Street and all three seasons of Amazon’s Mozart in the Jungle have earned new fans. Joshua Bell with Friends @ The Penthouse, Great Performances – Joshua Bell: West Side Story Suite from Central Park, Memorial Day Concert performed on the lawn of the U.S. Capitol, and A&E’s Biography also comprise his CV. He has twice performed on the Grammy Awards telecast, playing music from Short Trip Home and West Side Story Suite, and has been a presenter AND a Grammy Award recipient. He was one of the first classical artists to have a music video on VH1 and he was the subject of a BBC Omnibus documentary. Bell has appeared on radio programs worldwide and in publications ranging from The Strad and Gramophone to Time, The New York Times, People Magazine’s 50 Most Beautiful People, USA Today, The Wall Street Journal, GQ and Vogue among many.

In 2017, Bell connected with the virtual reality tech audience in an exciting collaboration with Sony. The Joshua Bell VR Experience is a live studio performance of Brahms’ Hungarian Dance No. 1 in full 360-degree VR. The experience which was awarded a Lumiere Prize is available for free download for SONY PlayStation VR.

Growing up with his two sisters in Bloomington, Indiana, Bell was an avid computer game player. He placed fourth in a national tennis tournament at age 10, and still keeps his racquet close by. At age four, he received his first violin after his parents, both mental health professionals, noticed him plucking tunes with rubber bands he had stretched around his dresser drawer handles. By 12, he was serious about the instrument, thanks in large part to the inspiration Josef Gingold, his beloved teacher and mentor. Two years later, Bell came to national attention in his debut with Riccardo Muti and the Philadelphia Orchestra. His Carnegie Hall debut, an Avery Fisher Career Grant and a notable recording contract further confirmed his presence.

Bell has received many accolades: In 2013 he was honored by the New York Chapter of The Recording Academy; in 2012 by the National YoungArts Foundation, in 2011 he received the Paul Newman Award from Arts Horizons and the Huberman Award from Moment Magazine. Bell was named “Instrumentalist of the Year, 2010” by Musical America and received the Humanitarian Award from Seton Hall University. In 2009 he was honored by Education Through Music and received the Academy of Achievement Award in 2008. He was awarded the Avery Fisher Prize in 2007 and was inducted into the Hollywood Bowl Hall of Fame in 2005.

In 2003 Bell was invited to perform at the World Economic Forum for an audience of global leaders and was later recognized by that prestigious organization as a Young Global Leader. He serves on the artist committee of the Kennedy Center Honors, the New York Philharmonic Board of Directors, and Education Through Music.

Bell served for three years as an adjunct professor at the Massachusetts Institute of Technology Media Lab, helping to develop a new line of musical instruments and toys. He currently serves as a senior lecturer at the Jacobs School of Music, his alma mater at Indiana University which has also honored him with a Distinguished Alumni Service Award. He has been named an “Indiana Living Legend” and is the recipient of the Indiana Governor’s Arts Award.