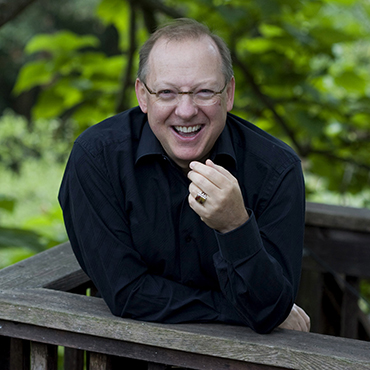 In the summer of 2017, McGegan conducted the Royal Northern Sinfonia for the BBC Proms in Hull, marking 300 years since Handel's Water Music was first famously performed on the River Thames. It was the first time since the 1930s a festival performance had been moved outside London.

One of Philharmonia’s greatest successes was the recent fully-staged modern-day premiere of Jean-Philippe Rameau’s 1745 opera-ballet Le Temple de la Gloire. PBO’s 2017/18 season opens in October with the North American premiere of Sally Beamish’s The Judas Passion, co-commissioned by PBO and London’s Orchestra of the Age of Enlightment (OAE). McGegan conducts the world premiere of the piece with OAE earlier in the fall. Other season highlights include Handel’s Messiah and his oratorio Joseph and his Brethren, a program with cellist Steven Isserlis, and Beethoven’s Choral Fantasy and Mass in C Major.

McGegan’s prolific discography includes more than 100 releases spanning five decades. Having recorded over 50 albums of of Handel, McGegan has explored the depths of the composer’s output with a dozen oratorios and close to twenty of his operas. Under its own label, Philharmonia Baroque Productions (PBP), Philharmonia has recently released almost a dozen acclaimed albums of Handel, Scarlatti, Vivaldi, Brahms, Haydn, Beethoven and more. McGegan’s latest release with PBO is the first-ever recording of the recently rediscovered 300-year-old work La Gloria di Primavera by Alessandro Scarlatti, recorded live at the U.S. premiere. Since the 1980s, Nic has released more than 20 recordings with Hungary’s Capella Savaria on the Hungaroton label, including groundbreaking opera and oratorio recordings of repertoire by Handel, Monteverdi, Scarlatti, Telemann and Vivaldi. Most recently, the collaboration has produced releases of Haydn, Kraus, Mendelssohn, Schubert and a 2-CD set of the complete Mozart violin concerti.

Mr. McGegan is committed to the next generation of musicians, frequently conducting and coaching students in residencies and engagements at Yale University, the Juilliard School, Harvard University, the Colburn School, Aspen Music Festival and School, Sarasota Music Festival and the Music Academy of the West. In 2013 he was awarded the honorary degree of Doctor of Music by the San Francisco Conservatory of Music, and in 2016 was the Christoph Wolff Distinguished Visiting Scholar at Harvard. McGegan’s fun and informative lectures have delighted audiences at Juilliard, Yale Center for British Arts, American Handel Society and San Francisco Conservatory.

English-born Nicholas McGegan was educated at Cambridge and Oxford. He was made an Officer of the Most Excellent Order of the British Empire (OBE) “for services to music overseas.” Most recently, McGegan was invited to join the board of Early Music America. Other awards include the Halle Handel Prize; the Order of Merit of the State of Lower Saxony (Germany); the Medal of Honour of the City of Göttingen, and a declaration of Nicholas McGegan Day, by the Mayor of San Francisco in recognition of his work with Philharmonia. In 2013, the San Francisco Conservatory of Music awarded him an honorary degree of Doctor of Music.

Visit Nicholas McGegan on the web at www.nicholasmcgegan.com.