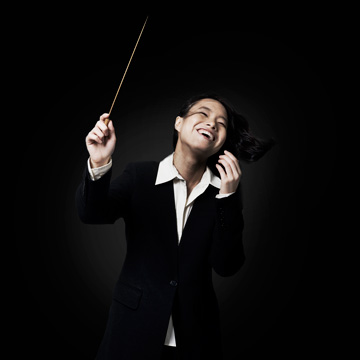 Recognized as a conductor of extraordinary versatility, Carolyn Kuan has enjoyed successful associations with top tier orchestras, opera companies, ballet companies and festivals worldwide. Her commitment to contemporary music has defined her approach to programming and established her as an international resource for new music and world premieres. Appointed Music Director of the Hartford Symphony Orchestra in 2011, she has signed a six-year contract extending their creative collaboration through May 2022.

Carolyn Kuan’s 2016/2017 season began with a project sponsored by Beth Morrison Projects, called Ouroboros Trilogy, a three-part exploration of life, death and rebirth as symbolized by the ancient Greek icon of a serpent eating its own tail. Working with composer Scott Wheeler, she directed Naga, one of the three operas commissioned for the trilogy. The season ended with the sensational premiere of Philip Glass’s opera The Trial with the Opera Theatre of St. Louis. Reviewer for Opera Today wrote: “And speaking of a ‘high caliber of ensemble playing,’ conductor Carolyn Kuan worked equal magic in the pit. Maestra Kuan elicited the all-important, pulsating, rhythmically precise orchestral execution, to be sure. She also drew an abundance of color from her players and singers alike, achieving a varied palette of satisfying musical effects.”

During the 2014/2015 season, Ms. Kuan made a summer-long debut with the Santa Fe Opera. Working closely with composer Huang Ruo and director James Robinson, and a mixed cast of east and west singers and instrumentalists, she conducted the premiere of Dr. Sun Yet-Sen to great critical acclaim. Other highlights of that season included her debut with the Washington National Opera at the Kennedy Center in Daniel Catan’s Florencia en el Amazonas, directed by Francesca Zambello; her return to the Seattle Symphony to lead works by Tan Dun, Yugo Kanno (U.S. Premiere), and Unsuk Chin; and her return to Brazil to work with Orquestra Sinfônica do Estado de São Paulo in a program of Britten, Turnage and Bernstein.

While maintaining a solid connection with traditional repertoire, Carolyn Kuan has cultivated a unique expertise in Asian music and contemporary works. From 2007 to 2012, she directed the annual San Francisco Symphony Chinese New Year concert. For the Seattle Symphony, Ms. Kuan helped launch the hugely successful Celebrate Asia! program with community leaders representing eight Asian cultures and led sold-out performances for three consecutive years. She has led world premieres for Music from Japan and has conducted multimedia productions of the Butterfly Lovers Concerto and A Monkey’s Tale as part of Detroit Symphony’s World Music Series.

From 2003 to 2012, Ms. Kuan was engaged with the Cabrillo Festival of Contemporary Music and visiting composers. Some of her finest successes have bridged the gap between cultural and social issues, as in her work raising awareness of conservation and the environment through her performances around the globe of the multimedia project Life: A Journey Through Time. Developed by the Cabrillo Festival of Contemporary Music and music director Marin Alsop, the project features music by Philip Glass and images by famed National Geographic photographer Frans Lanting. Ms. Kuan’s notable performances of Life include a presentation at the Ninth World Wilderness Congress with Orquesta Sinfonica de Yucatan; at the eight-day June festival, Change Is Powerful, with the Detroit Symphony; and at CERN’s (European Organization for Nuclear Research) historical Large Hadron Collider Inauguration, with Orchestre de la Suisse Romande attended by Swiss President Pascal Couchpin, French Prime Minister François Fillon, more than 20 other European heads of state and dozens of Nobel laureates.

Carolyn Kuan’s previous positions include Associate Conductor of the Seattle Symphony Orchestra; Artist-in-Residence at the New York City Ballet; and Assistant Conductor for the Baltimore Opera Company. In her 2012 debut album for the Naxos label, Ms. Kuan conducted the New Zealand Symphony Orchestra in various works by Chinese composers.