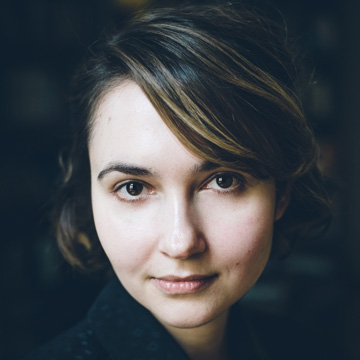 Having graduated in 2012 from the Royal Central School of Speech and Drama with a Master’s degree, Kateryna Sokolova went on to work in theatres such as Deutsche Oper Berlin, Theater an der Wien, De Nationale Opera in Amsterdam and Schauspielhaus Zürich. During this time, she was assistant to directors such as Christof Loy, Alvis Hermanis, Barbara Frey, René Pollesch, Stefan Pucher, Hans Neuenfels and Kasper Holten.

In 2014 she staged A Hero Of Our Time, after a novel by Michal Lermontov - her first work at the Schauspielhaus Zürich. 2016 and 2017 she staged Verdi’s Macbeth and Mozart’s Entführung Aus Dem Serial at the Staatstheater Oldenburg.

Future projects include Sancta Susanna at the Konzerthaus Wien and Genia at the Kammeroper Wien.

Kateryna Sokolova is a member of the European Academy of Music Theatre. She is furthermore winner of the German federal competition Jugend musiziert Hesse (Category Piano) in 2004, 2006 and a fellow of the German Academic Scholarship Foundation.