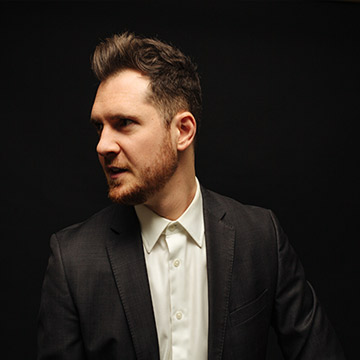 Known for his beautiful compositions, soaring vocals, and out-of-this-world projection mapped live shows, Bill Prokopow is a true musical tour-de-force. Prokopow has been writing and performing music since he was six years old and through the decades he has honed his taste and talents in nearly every way, from orchestras to a cappella groups, Warped Tour to Carnegie Hall, and everywhere in between.

Under the pseudonym “Will Post” Bill creates mind-bending live shows using projection mapped visuals that feel like a modern day Fantasia—taking audiences through a fully-immersive visual and sonic journey of the soul. The genesis album for this concept, “Panthenon” won the Independent Music Award’s first prize in the Concept Album category in 2015.

As a highly in-demand performer, Prokopow has had the honor of being a featured soloist with some of the top orchestras in the US, including the symphonies of San Francisco, Pittsburgh, Seattle, Nashville, and Oregon.

He also is a prolific composer, collaborator, and award-winning arranger. His instrumental compositions can be heard in movies, TV shows, and trailers all over the world. As a producer and performer, he was a founding member of the chip tune-based rock band I Fight Dragons and has mixed songs for many artists over a wide spectrum of genres including Chance the Rapper, I Fight Dragons, Dana Williams, Elijah Noll, Roy English, and many others.

Bill feels most at home when combining his classical sensibilities with the ethos of the current moment, creating work that serves the now and launches itself into the future, toward eternity.