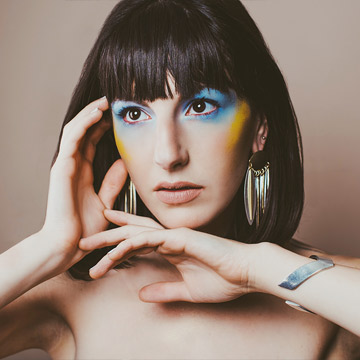 The field of music is a vast exploration for Kéren. She "sang before she could speak," and grew up in a multicultural environment where Western and Eastern musics were celebrated and influential. At the age of seven, Kéren began her musical theater career performing on some of New York City’s prominent stages. As she entered her teen years, Kéren picked up the guitar, which opened doors in the worlds of songwriting and accompaniment, and allowed for her musical palette to expand into new territories. During her years studying at the Berklee College of Music, Kéren was featured in many of the school’s major showcases, and could frequently be found in the studio late into the night, working on various albums, recording projects, and commercial jingles.

Kéren ventured to the West Coast soon after her studies to work with renowned music industry personnel, and recorded her debut album Bliss Point with her band, Jungle Fires. As her career continues to develop and expand, Kéren enjoys collaborations with a variety of artists and producers and also tours and performs around the world. Since 2015, Kéren has been working with Steve Hackman on various projects including his mash-up series, performing in the Brahms vs. Radiohead program, as well as in the Copland vs. Bon Iver program. Through these works, she has been honored to perform with the Pittsburgh Symphony Orchestra, the Nashville Symphony, Colorado Music Festival, and many others.

After Kéren's initiation into meditation practices and healing modalities, she began to use her musical skill-set to accompany and deepen her practices, working with soundscape design, voice, indigenous/world instruments, singing bowls, and more.

Kéren looks forward to continuing her exploration of music and sound as a means for connection, community, and healing. In her upcoming endeavor, Kéren will release her original compositions and arrangements for the first time as a solo artist in a new project. (Follow @kerensound for info!)

It is with deep gratitude and that Kéren shares her gifts.