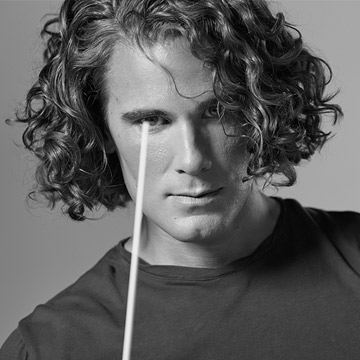 Steve Hackman is a daring voice leading the charge among a new generation of classical musicians intent on redefining the genre. Equally adept in classical and popular forms, his breadth of musical fluency and technique is uncanny—he is at once a composer, conductor, producer, DJ, arranger, songwriter, singer, and pianist. He uses those wide-ranging abilities to create hybrid compositions that blur the lines between high and pop art. The result is evocative works that are both derivative yet wholly original. He synthesizes Brahms and Radiohead, Bartók and Björk, and Beethoven and Coldplay into epic orchestral tone poems; re-imagines Stravinsky and Shostakovich into original orchestral-electronic concept albums; and samples Verdi and Debussy and interpolates them into hip-hop tracks. His performances of these pieces have surprised and thrilled diverse sellout audiences across the country, including with the orchestras of San Francisco, Seattle, Pittsburgh, Colorado, Nashville, Oregon, Indianapolis, Grand Rapids, Columbus, Charlotte, Southwest Florida, Alabama, and the Boston Pops.

Hackman serves as Creative Director of the Indianapolis Symphony’s Stella Artois Happy Hours Series, one of the most successful millennial-focused concert experiences in the country. Hackman has been instrumental in the development of this concert series since 2010. One of the highlights of this season’s programming will be the premiere of his newest fusion work The Resurrection Mixtape, a combination of Mahler’s Second Symphony and the music of Tupac Shakur and Notorious B.I.G.

In January 2020, Hackman led the Nashville Symphony in the orchestral premiere of The Times They Are A-Changin’, a fifteen-song re-imagining of Bob Dylan. The piece was commissioned by six American choirs and received its choral premiere with the Mendelssohn Choir of Pittsburgh. In early 2019, Hackman debuted IGOR DAMN STRAVINSKY, an orchestral/hip-hop synthesis of Stravinsky's Petrushka and Kendrick Lamar's Pulitzer Prize-winning album DAMN.

In September 2019, Hackman recorded a seventy-piece orchestra of LA’s finest studio musicians at Eastwood Soundstage on the Warner Brothers lot for his original music project STEREO HIDEOUT. The results will be heard on the upcoming Stereo Hideout album The Revival.

In June of 2017, Hackman was invited to perform an excerpt from Beethoven V. Coldplay at the Microsoft INSPIRE convention at the Verizon Center in Washington, D.C., for nearly 20,000 people from around the world.

After conducting a concert with Andrew Bird in 2018, Hackman was asked to play piano with Bird on the live taping of the PBS show Articulate. Other soloists and ensembles Hackman has composed/arranged for and collaborated with include the Beach Boys, Michael Bolton, Aoife O’Donovan, Storm Large, and Carly Rae Jepsen; violinist Joshua Bell; and choral ensembles Chanticleer, The Tallis Scholars and the Brooklyn Youth Chorus. In addition, he has collaborated closely with the group Time for Three for nearly a decade, serving as their music director for a time, producing two of their albums, and penning over fifty arrangements, orchestrations, and compositions. Hackman is also a frequent contributor to From the Top.

From 2015-2017, Hackman served as creative director and conductor of FUSE@PSO, a genre-defying series of the Pittsburgh Symphony that introduced the symphony to thousands of new listeners. From 2013 to 2015, Hackman was music director of the “Mash-Up” series at the Colorado Music Festival.

Hackman studied counterpoint, composition and improvisation under his mentor Dr. Ford Lallerstedt at the Curtis Institute of Music in Philadelphia. He received an advance diploma in conducting at Curtis under Otto-Werner Mueller and studied subsequently with David Zinman at the American Academy of Conducting at Aspen. He received further training in orchestration from the Broadway orchestrator and composer William Brohn. His undergraduate degree is in piano performance from the University of Illinois at Urbana-Champaign, where he studied with Gustavo Romero.

Hackman is active on social media under the handle @stevehackmanmusic, and his original music can be heard at @stereohideout.