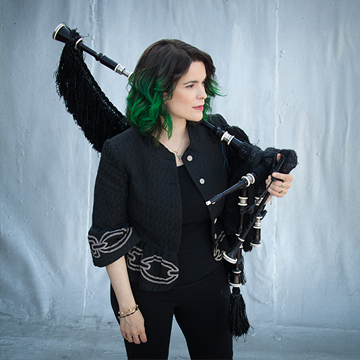 Cristina Pato is a master of the Galician bagpipes (gaita), a classical pianist and a passionate educator. Hailed as “a virtuosic burst of energy” by The New York Times, her professional life is devoted to cultural exchange and forging new paths for the Galician bagpipes. Pato has performed on major stages throughout the world and has released and produced six solo gaita albums and two solo piano recordings and collaborated on more than 40 albums as a guest artist.

Education is a critical part of Pato’s personal and professional life. She serves as Learning Advisor for the Silkroad Ensemble, which was founded by Yo-Yo Ma, has been an artist-in-residence at a number of universities, including Harvard and the University of California, Santa Barbara, where she develops interdisciplinary learning projects on the role of arts in society. She is the founder of the multidisciplinary Galician Connection Festival and writes a weekly column for the Spanish newspaper, La Voz de Galicia.

An active performer, lecturer and public speaker, Pato holds a Doctorate of Musical Arts from Rutgers University, degrees in piano, music theory and chamber music from the Conservatori Superior de Música del Liceu, and a Master of Fine Arts from the Universitat Pompeu Fabra. Pato is getting her second PhD in Cultural Studies and has co-created a groundbreaking pilot class on Memory with neuroscientist Dr. Kenneth Kosik.