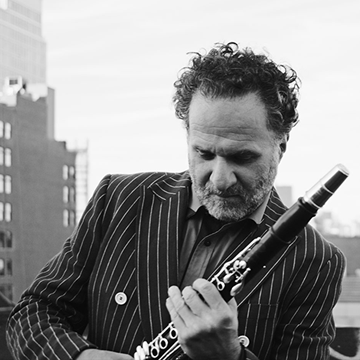 Clarinetist David Krakauer occupies the unique position of being one of the world’s leading exponents of Eastern European Jewish klezmer music and also a major voice in classical music. As one of the foremost musicians of the new wave of klezmer, Krakauer tours the globe with his celebrated Klezmer Madness! ensemble. While firmly rooted in traditional klezmer folk tunes, the band “hurls the tradition of klezmer music into the rock era” (The New York Times).

In addition to European tours to major international festivals, Krakauer has performed at the Library of Congress, Stanford Lively Arts, Carnegie’s Zankel Hall, the Venice Biennale, Krakow Jewish Culture Festival and the BBC Proms. His newest project, The Big Picture, re-imagines familiar themes by film composers such as John Williams, Marvin Hamlisch, Randy Newman and Wojciech Kilar and interprets melodic gems that have appeared in films.

Krakauer is in demand as a guest soloist with the finest ensembles including the Emerson, Orion and Kronos string quartets; the Amsterdam Sinfonietta; the Detroit Symphony Orchestra; the Weimar Staatskapell; the Phoenix Symphony; the Dresden Philharmonic; and the Seattle Symphony.

Krakauer’s discography contains some of the most important klezmer recordings of the past decade including collaborations with the Klezmatics, Itzak Perlman, the Kronos Quartet and Osvaldo Golijov. Composers who have written major pieces for him include David del Tredici, Paul Moravec, Ofer Ben-Amots, Jean Philippe Calvin and George Tsontakis. Krakauer can be heard as soloist in Danny Elfman's score for the film Taking Woodstock and throughout The Tango Lesson.