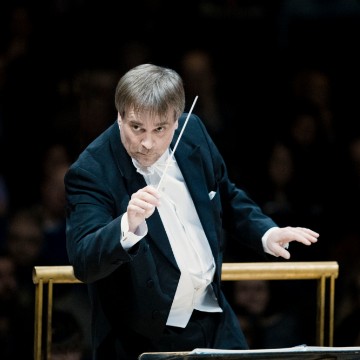 John Storgårds made his North American debut with the St. Paul Chamber Orchestra during the 2005/06 season. Since then, he has appeared with the New York Philharmonic, the Boston Symphony at Tanglewood, the Cleveland Orchestra at Blossom, and the Chicago, Toronto, St. Louis, Detroit, National, Atlanta, Montreal, Cincinnati, Vancouver, Baltimore, Indianapolis and Houston symphonies. Highlights of Mr. Storgårds’ 2018/19 North American season include subscription debuts with the Boston, Pittsburgh and Dallas symphonies and return appearances with the Cleveland Orchestra at Blossom, as well as with the National, Detroit, Toronto, St. Louis and Cincinnati symphonies.

Highlights of his 2018/19 season in Europe include a return to the BBC Proms with the BBC Philharmonic, debut appearances with the Munich Philharmonic, Dresden Staatskapelle and Seoul Philharmonic, as well as the Radio Symphony Orchestra Berlin at the Berlin Philharmonie and on tour conducting Bruckner Symphony No. 5.

Equally at home in the opera house, John Storgårds conducted the Finnish premieres of both Haydn’s Orlando Paladino at the Finnish National Opera and Schumann’s only opera, Genoveva, and in summer 2016, he led a new production of Don Giovanni at the Savonlinna Opera Festival. He has also conducted most of the Mozart operas as well as the major operas of Strauss and Verdi. In September 2017 Storgårds gave the world premiere of Sebastian Fagerlund’s new opera Höstsonaten (Autumn Sonata) at the Finnish National Opera with Anne Sofie von Otter in the leading role.

John Storgårds’ repertoire includes not only all of the Sibelius, Nielsen, Bruckner, Brahms, Schubert, Beethoven and Schumann symphonies, but many works by today’s leading composers, including world premieres of works by Kaija Saariaho, Brett Dean, Per Nørgård and Peteris Vasks, several of whom have dedicated their works to him. He gave the Finnish premieres of Schumann’s early Zwickau symphony as well as the world premieres of Sibelius’ Suite op. 117 for Violin and Strings and the Late Fragments. As a violinist, he performed the Finnish premiere of Schumann’s own violin version of the cello concerto and his Violin Sonata No 3.

Mr. Storgårds’ award winning discography includes recordings of works by Schumann, Mozart, Beethoven and Haydn, but also rarities by Holmboe and Vask, which feature him as violin soloist. Two cycles of symphonies by Sibelius (2014) and Nielsen (2015) with the BBC Philharmonic were released to critical acclaim by Chandos. His most recent recording with the BBC Philharmonic is works by American avant-garde composer George Antheil. Additional recordings include discs of works by Nørgård, Korngold, Aho and Rautavaara, the latter receiving a Grammy nomination and a Gramophone Award in 2012. Storgårds’ recording with the Chamber Orchestra of Lapland of concertos for theremin and horn by Kalevi Aho received the distinguished ECHO Klassik award in 2015. In summer 2018 he records the Alfredo Casella Violin Concerto for Chandos with the BBC Philharmonic and Gianandrea Noseda conducting.

Mr. Storgårds studied violin with Chaim Taub and subsequently became the concertmaster of the Swedish Radio Symphony Orchestra under Esa-Pekka Salonen, before studying conducting with Jorma Panula and Eri Klas at the famed Sibelius Academy. He received the Finnish State Prize for Music in 2002 and the Pro Finlandia Prize 2012.