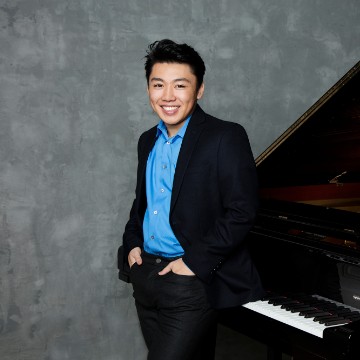 Praised by the Washington Post for combining "staggering technical prowess, a sense of command and depth of expression," pianist George Li possesses an effortless grace, brilliant virtuosity and poised authority far beyond his years. Since winning the Silver Medal at the 2015 International Tchaikovsky Competition, Li has rapidly established a major international reputation and performs regularly with some of the world’s leading orchestras and conductors such as Gergiev, Dudamel, Honeck, Petrenko, Tilson Thomas, Robertson, Slatkin and Long Yu.

In the 2018-19 season, Li makes his debuts with the London Philharmonic, Montreal Symphony, Tokyo Symphony and Royal Liverpool Philharmonic; embarks on an 11-city recital tour of China; and tours the United States with the Russian National Orchestra and Mikhail Pletnev.

Li gave his first public performance at Boston’s Steinway Hall at the age of ten and in 2011, performed for President Obama at the White House in an evening honoring Chancellor Angela Merkel. Among Li’s many prizes, he was the recipient of the 2016 Avery Fisher Career Grant, a recipient of the 2012 Gilmore Young Artist Award and the First Prize winner of the 2010 Young Concert Artists International Auditions. In summer 2018, Li graduated from the Harvard University / New England Conservatory joint program, where he studied with Wha Kyung Byun.